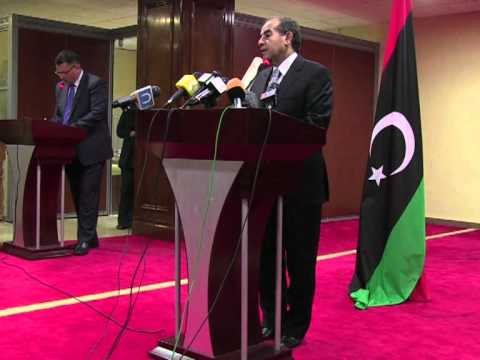 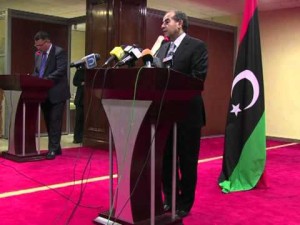 Libya’s fifth Prime Minster Ahmed Maiteeq has held his first cabinet meeting after police officers helped him take over the building housing his office.  He read out a message to the Libyan populace on television. Meanwhile outgoing Prime Minister Abdullah al-Thinni has not stepped down from power but has moved to another government building. Libya presently has two governments that assume that they are running the government.
According to Maiteeq’s spokesman, there were “no difficulties” in taking over the parliamentary building. Maiteeq was escorted to the building by armed police men who handed over his assignment letter endorsed by the parliament before taking over the building. The spokesman stated that “there was no opposition from the security services deployed in front of the building.”
However, the outgoing Prime Minister has refused to step down even though he has resigned in April. He has refused to hand over power because of the controversy which marred Maiteeq’s election in parliament. Al-Thinni has urged the General National Congress to solve the matter before the standoff degenerates. First Deputy Parliamentary Speaker Ezzedin al-Awam said Thinni had told him that he has not handed over officially the prime minister’s office to Maiteeq.
The General National Congress is divided on the issue. Its members are at the heart of a growing confrontation among rival political parties and brigades of former rebels who refuse to disarm and have allied themselves loosely on competing sides of a split congress. Maiteeq mostly derives his support from the independents and Islamist lawmakers.
Since the end of the Gadhafi regime, Libya has been unable to establish a functional government. The security forces are being challenged by militant groups and a discord within politicians could further worsen the situation.