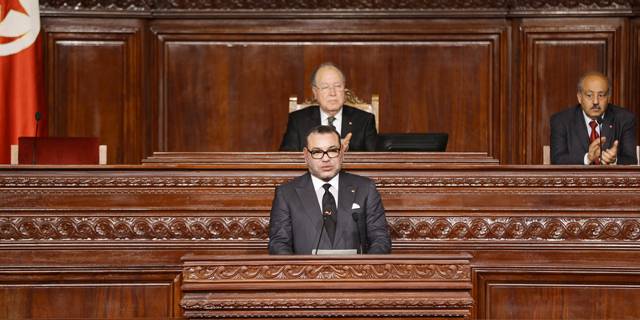 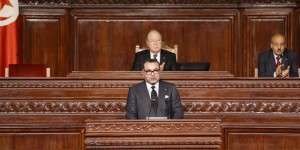 Morocco has pleaded for the advent of a new Maghreb order and for the construction of a large, strong Maghreb so that the region plays its political, economic, social and security role, so that Maghreb countries make the most of their vast potential, and so that the Maghreb Union supports Arab and Islamic causes, particularly the Palestinian question, and becomes an influential player in Africa, where regional African groupings are playing a more prominent role.
The plea was made by Morocco’s King Mohammed VI while he was addressing on Saturday the Tunisian National Constituent Assembly.
“The Maghreb Union is no longer a mere option or a political luxury; it has become a pressing popular demand and an inevitable strategic goal in the region,” said the king who was on a three-day official visit to Tunisia, his first since the popular uprising which overthrew President Zine el-Abidine Ben Ali in 2011 and started the so-called Arab Spring.
“The advent of an integrated Maghreb should be the result of a pragmatic approach and should give tangible meaning to the aspirations of the region’s peoples. It would consolidate the partnership between Maghreb countries and their European neighbors in the framework of both the 5+5 West Mediterranean dialogue as well as in the larger context of Euro-Mediterranean cooperation,” said the King, who devoted almost half his speech to the deadlocked Maghreb Union.
The Maghreb Union was launched in February 1989 by Algeria, Libya, Mauritania, Morocco and Tunisia but could not really take off because of bilateral disputes between its members and especially the dispute opposing Algeria and Morocco over the Western Sahara.
Describing as “regrettable” the obstruction of the Maghreb Union’s evolution, the king said the situation “poses a serious risk for the future of our region, preventing it from keeping pace with predominant global trends whose key features are the emergence of blocs, complementarity and integration.”
“Those who believe a country can single-handedly address development issues and meet the legitimate aspirations of its people are wrong, especially when it comes to meeting the demands of Maghreb youth, who are our greatest asset,” he said. The king who mentioned the development and security challenges facing the Sahel and Sahara region said “those who think a country can deal with security and stability problems on its own are just as wrong.”
“Wrong, too, are those who think the status quo can be maintained, or who believe that keeping our Greater Maghreb in a state of lethargy can somehow be a fruitful strategy; a case in point is the ongoing closure of borders, which is not only at odds with the Union’s founding charter, but is also inconsistent with the normal course of history and the requirements of geographic complementarity and cohesion,” said the king alluding to the Moroccan-Algerian borders which have been closed since 1994.
The King who recalled that he has himself, and for years, advocated the advent of a new Maghreb order that would enable the Union members to rise to various development and security challenges, renewed his call on Maghreb countries “to show a genuine will to overcome the artificial hurdles and obstacles hindering the effective launching of our Union in an environment characterized by trust, dialogue, neighborliness and mutual respect for our national specific features.”
Although the five members of the Union represent a potential market of nearly 100 million consumers, inter-Maghreb trade is among the lowest and does not exceed in the best case 3 percent of the total trade of each country.
The cost of what has been called the non-Maghreb is too high and is estimated to range between one and two percentage points of annual economic growth. The Maghreb integration failure costs each country 2 percent of its annual growth, while the Maghreb Union could have gained each of the five countries 5 percent of GDP. According to World Bank estimates a deeper integration, including the liberalization of services and the reform of investment rules would have increased the per capita real GDP between 2005 and 2015 by an additional 34% for Algeria, 27% for Morocco and 24% for Tunisia.