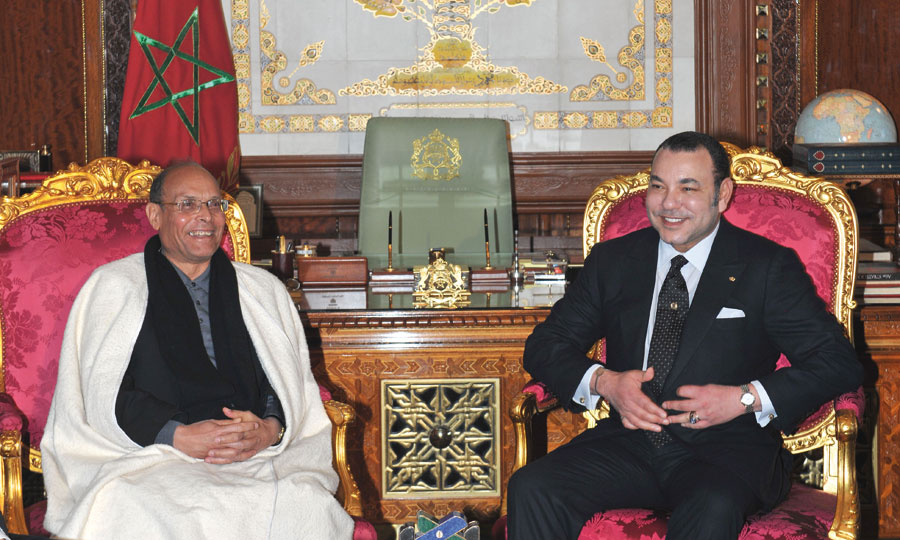 Morocco, Tunisia to Give New Momentum to their Relations 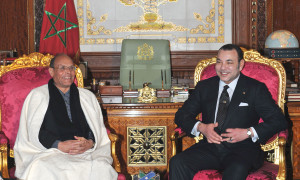 Morocco and Tunisia are poised to give a new momentum to their traditionally close bilateral relations, not only at the political scale but also at the level of economic relations and trade ties.
Ways and means to fulfil the goal are being discussed at the highest level between Tunisian President Moncef Marzouki and Morocco’s King Mohammed VI who is undertaking a three-day official visit to Tunisia as of this Friday (May 30.)
The king’s visit, the first since the ouster of Zine el Abidine Ben Ali during the first weeks of the Arab spring in January 2011, is of paramount importance to the two Maghreb countries which are facing unprecedented geopolitical challenges that threaten the entire region, from the Maghreb to the Sahel and beyond.
During the visit, the king of Morocco will address the National Constituent Assembly and will co-chair with the Tunisian president the signing of several agreements involving both the public and private sectors. The agreements are meant to boost bilateral economic and trade relations which remain weak despite the excellent political ties binding the two countries.
Actually, trade exchanges hardly exceeded € 230 million in 2013 and although Tunisia is Morocco’s third economic partner in Africa, its share in the kingdom’s total foreign trade represents only 0.45 percent. Compared to 2012, Tunisian exports to Morocco have fallen by 10.3 percent while imports from the Kingdom have dropped by 30.3 percent.
Some analysts impute the weak results scored last year to the situation in Tunisia, which is slowly recovering from the serious political, security, economic and identity crisis that had, for months, entangled the country, the cradle of what has been called the Arab Spring. Earlier this year, Tunisian political stakeholders reached compromise and adopted a new Constitution, sparing the country the abyss of violence and chaos still plaguing neighboring Libya and Egypt where the reverberations of the so-called Arab Spring are still felt. The adoption of a new Constitution also heralded that the transition was going back on track and that the democratic march was being carried on, with general elections tentatively scheduled for the end of the current year.
King Mohammed VI’s official visit to Tunis in this special juncture is viewed as a token of Morocco’s active and unflinching solidarity with Tunisia and of its support to the North African State’ s democratic process, stability, security and prosperity.
The royal visit also translates Morocco’s willingness to share its experience with Tunisia in several areas, including decentralization and regional development as well as anti-terror struggle especially that Tunisia has been grappling with its budding domestic jihadist threat since the popular uprising in 2011. The Guerrilla movement, hiding in the western mountains along the border with Algeria, has reportedly been involved in several attacks across the country, and is said to be responsible of the attack on Wednesday against the family home of the Interior Minister wherein four guards have been killed and three wounded before the attackers escaped.
Besides its homegrown Jihadists, Tunisia is threatened by foreign terrorists who can easily enter the country through its porous borders with both Algeria and Libya and therefore needs support in its anti-terrorism combat more than ever before.
In this vein, Tunisia, following suit to many other countries, mainly from sub-Saharan Africa, has already requested Morocco, which is known for its successful approach to religious affairs management, to help it train Tunisian Imams and preachers in a bid to promote the values of tolerance and moderation according to the genuine precepts of Islam.