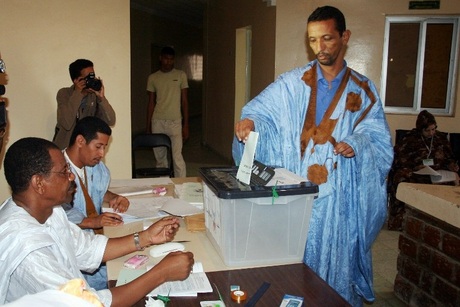 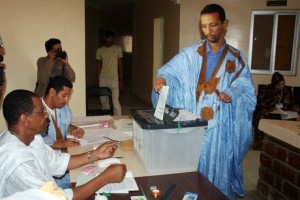 Registration with the Mauritanian Constitutional Council has ended with six candidates willing to contest in the June 21 presidential polls. Most of the opposition political parties are boycotting the elections because they claim that it lack s credibility and transparency.  Some of the candidates will be vying for the presidency for the first time and amongst them is a female.
President Mohamed Ould Abdel Aziz is considered to be the favorite candidate to win the elections. He came to come power through a military coup d’état before legitimizing his stay after winning the 2009 elections.
President Abdel Aziz has been applauded by Western countries for his efforts in fighting Al-Qaeda linked groups in the Maghreb especially those operating in the Sahara desert. According to Reuters, the Mauritanian army is one of the most effective in West Africa and it had contributed immensely in fighting against the terrorist in Mali from 2010 to 2011.
Potential contestants that could compete with the president are Boidel Ould Houmeid and Ibrahim Sarr. Houmeid served as a government minister under Abel Aziz but will be the flag bearer of El Waim; a moderate political party. On the other hand, Ibrahima Sarr will contest under the colors of the AJD-MR party. He failed in his last attempt in 2009 to win the elections. The party is mostly supported by the Peuhl ethnic group.
The president’s cousin, Aliounne Ould Bouamatou, will also be hoping to occupy his Uncle’s post after the June 21 elections. Among the political newcomers in the field are anti-slavery campaigner Biram Ould Abeid; lawyer Ahmed Salem Ould Bouhoubeinise; and Mint Moulaye Idriss, an administrator at Mauritania’s national press agency. She will be only the second female presidential candidate in the country’s history.