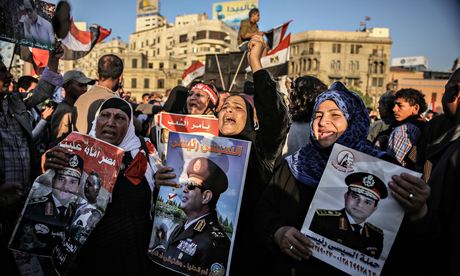 Egypt’s Old Guard Back in Power: Al-Sisi in Bouteflika’s Footsteps? 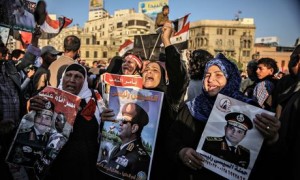 After Abdelaziz Bouteflika claimed a “crushing victory” in his bid to win a fourth term as Algeria’s leader and his main rival, Ali Benflis, has accused him of a “massive fraud”, Egypt seems to be headed to a similar scenario: While Egypt’s interim government has characterized the upcoming election as an important step towards democracy, the opponents have expressed concerns about integrity of vote. Abdel Fatah al-Sisi moved one step closer to Egypt’s presidency on Sunday (20 April) as nominations closed, leaving the retired army boss and the leftist Hamdeen Sabahi as the only two high-profile candidates in the race. Much like Algeria’s incumbent Bouteflika, also Sisi is widely expected to easily win the election to be held on 26-27 May, if only because he has more support than any other candidate, he has received an explicit mandate and backing from the army, and ample favorable coverage from most state and private media.
Egypt’s interim government, installed by Sisi in July 2013, has hailed the vote as “extremely free and fair” and as a very important step on the road towards democracy. But human rights activists and opposition politicians have repeatedly questioned the integrity and fairness of the poll. While at least 16,000 mainly Islamist dissidents have been arrested in an ongoing crackdown on dissent, three high-profile candidates from the 2012 presidential campaign have boycotted the race, complaining about the absence of free expression in Egypt, and Mohamed Morsi’s Muslim Brotherhood was banned by court order this week from taking part. Dozens of activists campaigning against Egypt’s new constitution earlier in January were detained while distributing campaign posters, while other prospective candidates complained they were – possibly deliberately – ignored by most media networks. It is telling that when Sisi announced his intention to run for office last month, state television broadcast his speech in a prime-time television slot, but the same privilege was not afforded to the second presidential candidate, Sabahi, who was allowed only a short state-made documentary about his career.