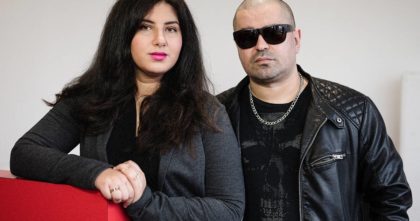 The Filali couple, Dounia and her husband Adnane, active on social networks serving the interests of some countries, advocates anti-Semitism & apology of terrorist groups, seeks political asylum in France, while their trade is based solely on white slavery and accessories.
In a story published by Liberation daily, anti-semitic, anti-France and racist messages, which were posted several years ago by the Filali couple, were used again by the couple who surprisingly benefits from the complacency of French authorities.
The French government, which outlined in October 2021 in the Senate the vision that France will carry during its presidency of the European Union in order to build a consensus on asylum and migration pact, has not hesitated in wanting to offer refugee status to Dounia and Adnane Filali, known for their hate speech.
In a very biased story, the French newspaper turned Dounia Filali into a youtuber who supposedly investigates corruption and repression in Morocco, without any prior verification worthy of a major newspaper.
This daily, known for its racist and manipulative tendencies, persists in denigrating the reforms and modernization engaged in Morocco. The political and economic rapprochement between Morocco and Israel makes several European countries and entities nervous.
Moreover, the National Bureau of Vigilance Against Antisemitism has officially asked the French authorities and particularly the French Office for the Protection of Refugees and Stateless Persons (OFPRA) to refuse asylum in France to Filali Dounia and Adnane, who are neither refugees nor stateless persons.