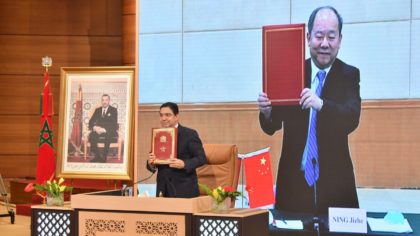 Morocco has become a key country for China in its new silk roads project, thanks to the Kingdom’s attractiveness and geostrategic location, French Magazine Le Point underlines in an article published on Thursday.

“Morocco has strengthened its position as a gateway to Europe and Africa in recent years. This has not escaped the attention of China, which is showing an increasing economic interest in the Kingdom,” writes the author of the article entitled: “Morocco, key player for China in the Maghreb”.

“Due to its geostrategic location, the Kingdom has positioned itself as the entry point for European investments in Africa…” Its “port, Tanger Med, has entered the top 25 global port hubs and is third in terms of connectivity behind Shanghai and Panama City.”

“This has not escaped China,” the magazine writes one day after Morocco and China signed the agreement on the Joint Implementation Plan of the Belt and Road Initiative.

Since King Mohammed VI’s visit to China in 2016, the two countries have strengthened their partnership at all diplomatic, cultural and especially economic levels, increasing the volume of their trade, notes the magazine.

“Morocco even became the first country in the Maghreb to join, in November 2017, the great project of new silk roads that aims to improve trade links between Asia, Europe, Africa and even beyond through the construction of ports, railroads, airports or industrial parks,” stresses the French magazine.

According to the French magazine, which cites the School of Economic Warfare (EGE), “Morocco’s geographical location, between Africa and Europe, its ability to provide a skilled workforce, its infrastructure and logistics and its unparalleled stability in the region may explain the interest of the People’s Republic of China for the Kingdom.”

The publication underlines that this interest “is also reflected in figures. Thus, bilateral trade has grown by 50% in the last five years, from 4 billion dollars in 2016 to 6 billion dollars in 2021, while more than 80 Chinese investment projects are underway in Morocco.”

The magazine also recalls that last July, Rabat and Beijing took a new step by signing agreements in the field of health, particularly in the context of the COVID-19 pandemic with the manufacture of the COVID-19 vaccine Sinopharm in the Kingdom.

Sinopharm company and the Moroccan government are currently working closely to promote the phase III trial, procurement and production of the COVID-19 Vaccine.

“This was only a step before the signing of new agreements to achieve a greater involvement of the Kingdom of Morocco in the Belt and Road Initiative,” says the publication.

The agreement on the joint Belt and Road Implementation Plan between Morocco and China was hailed by the two sides as a tool opening a new era in bilateral cooperation, and adding momentum to a deeper cooperation in matters of infrastructure.

The agreement aims to promote access to Chinese funding provided by the Belt and Road Initiative (BRI) for the realization of large-scale projects in Morocco or for the facilitation of trade, the establishment of joint ventures in various fields, including industrial parks, energy, renewable energy…