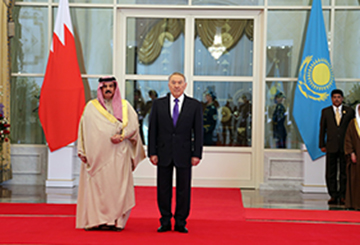 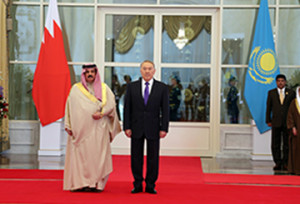 His Majesty King Hamad of Bahrain, during a visit to Kazakhstan, revealed plans for major investments and creation of a free trade zone between the two countries. While appreciating the hospitality of Kazahk President Nursultan Nazarbayev, King Hamad hailed the signing of the memoranda of understanding which will bolster and provide a platform for cooperation and future investments inducing mutual benefits. He urged his government and the private sector to participate in Astana Expo 2017 with plans to sign an agreement to encourage and protect investment, avoiding taxation and fiscal evasion.
The King said “Bahrain and other GCC countries will hold negotiations on establishing a free-trade zone with Kazakhstan”. He commended President Nazarbayev for supporting Bahrain in bolstering national security and pointed the importance of the Bahraini-Kazakh Business council in uplifting their economic cooperation. He also added that his country would be part of the Astana-based Islamic Food Security Organization first advocated for by Nazarbayev.
President Nazarbayev said the two countries are embarking on a joint cooperation and noted that the first-ever Royal visit of King Hamad and his delegation was a reflection of the king’s open heart. He also stressed on the importance of Bahrain as an essential partner as its location is perceived as a gateway to the Arabian Gulf region. The Kazakh President sees the celebration of the National days of both countries being on the same day, November 16, as a good omen. He highlighted the impressive all-round development achieved by the King of Bahrain and commended the high standard of living which has given Bahrain its reputation as regional financial center. With a GDP topping $220billion, Kazakhstan is fast-tracking its economy under the 2050 development program.