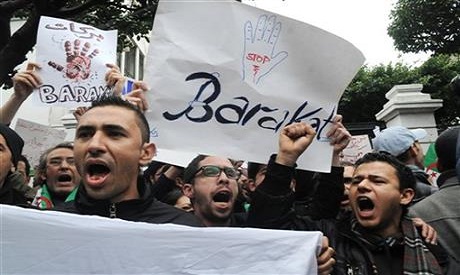 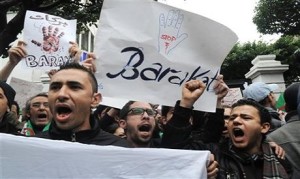 Despite unprecedented opposition protests, Algeria is likely to elect the incumbent Abdelaziz Bouteflika for his fourth term as the country’s fifth president being in office since 1999. Mr Bouteflika previously served as Minister of Foreign Affairs from 1963 to 1979, presided over the end of the Algerian Civil War in 2002, and ended emergency rule in February 2011 amidst regional upheaval.
Last month, a group of demonstrators gathered in front of Algiers University in the city centre to protest against Mr Bouteflika’s decision to run for the next term as president of Algeria. The gathering was being observed by scores of policemen that were there to ensure that the demonstration would not spread to beyond the Fac Centrale a’Alger. As put by Kamal Benkoussa, a supporter of “Barakat” (meaning “enough” in Arabic), there were no more than 100 protesters but about three times more policemen. Barakat is a civil society movement founded in early 2014 to campaign against Mr Bouteflika’s fourth mandate. Their main goal is to support a democratic transition in the country.
Last month’s demonstration was the most recent in a series of protests organized by Barakat against Bouteflika’s decision to run in the upcoming presidential elections scheduled to take place on April 17. In Algeria, political dissent is not tolerated and therefore the success of Barakat in gathering support around the country is a major achievement especially given a 1991 law requiring an authorization by the government for any public gathering or meeting to take place. Moreover, in 2001 legislation was broadened so that any demonstration in the capital Algiers is now forbidden.