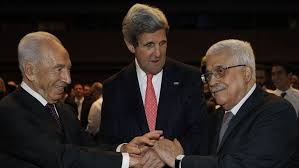 Palestinian and Israeli officials met on Sunday to discuss their differences that risk to jeopardies the negotiations between them. United States was demanded by both parties to call another meeting on Monday to help make the discussion successful. The Sunday meeting was “serious and constructive” according to a Palestinian official and both sides have shown their desire to further pursue it. The two parties came together on Sunday evening, a U.S representative, Martin Indyk, but the meeting finished fruitless, confirmed by sources.
Israel is ready to move on with discussions “but not at any price” as quoted from Prime Minister Benjamin Netanyahu. He went on to advice that they will take react to decisions taken by Palestine that they consider contradictory to a final peaceful solution.
Palestinians infuriated the Israelis when they sought to gain wider international recognition by attempting to attain a full-fledged U.N. membership, and join 15 other international organizations because Israel is reluctant to release the fourth batch of prisoners; a key condition for the peace talks to continue. This made Israel consider imposing more sanctions on the Palestinians
The US is trying to calm tensions between the two camps.  The U.S secretary of state made a public statement to re-examine his country’s duty as mediator of the truce after Israelis refusal to releasing some Palestinian prisoners.
Some observers are still optimistic that a deal will be reached but have urged officials from Palestine, Israel and the U.S to highlight the achievements that been made since the negotiations began.  Israel’s parliament was also meeting in special session on Monday during its spring recess, for a debate on the peace negotiations called by opposition MPs critical of the government’s handling of the talks.