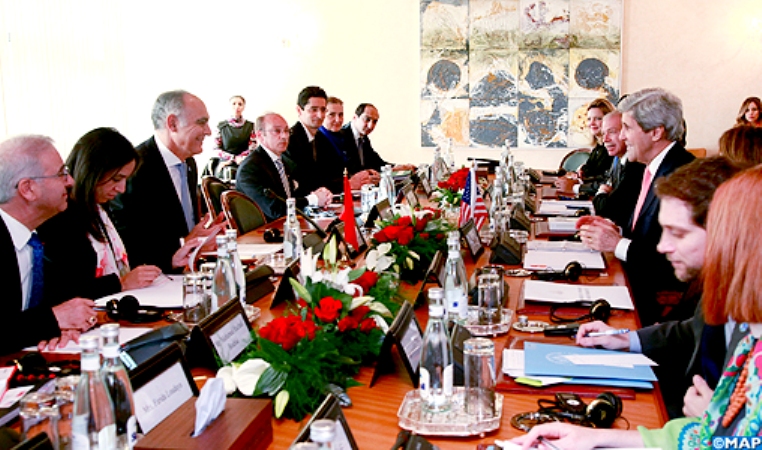 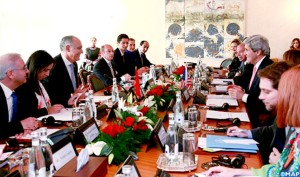 The United States and Morocco have renewed pledge to use their strong strategic partnership to advance shared priorities of a stable, democratic and prosperous Maghreb, Africa and Middle East.
The pledge was renewed during the second session of the United States-Morocco Strategic Dialogue held last Friday in Rabat.
U.S. Secretary of State John Kerry who co-chaired the session with his Moroccan peer underlined Morocco’s leadership to promote social development and economic prosperity within Africa and reaffirmed his country’s desire to work jointly with Morocco to ensure stability and human development in the continent through a comprehensive and coordinated approach including food security, access to energy, and trade promotion.
“So whether in Morocco’s support for Mali’s new government or its continued efforts to counter violent extremism, in its robust economic outreach in the region and commitment to fostering religious tolerance, Morocco is playing an essential leadership role and we come here today to show our understanding of and respect for that role,” Kerry said during the meeting, adding that the U.S. administration expects Morocco to actively participate in the United States -Africa Leaders Summit, which will take place next August in Washington.
The joint statement released at the end of the session also insisted on the shared commitment of Morocco and the United States in favor of stability and security in Africa, recalling that the “African Lion” military maneuvers that wound up on Friday in Agadir reflect “a vision of a consolidated cooperation meant to strengthen security of the peoples of the region.”
In matters of security, the United States and Morocco stand side by side, Kerry said, underlining that the United States has been participating in African Lion military exercise for a decade now, and that these exercises are being expanding to include other partners from Africa, Europe, and Canada.
“And Morocco’s military commitments continue to be a mark of strength and a stabilizing force in the region. And the evolving threats in the Maghreb make it clear that this kind of commitment is really more vital than it’s ever been,” Kerry said.
Eighteen countries have participated in this year’s African Lion drills. The 2015 edition, to be attended by AFRICOM, will be marked by unprecedented maneuvers ever conducted in Africa, consecrating thus Morocco’s leadership in the fight against terrorism and the promotion of peace, security and stability in the continent.
The Secretary of State also commended Morocco for its leadership in the Global Counterterrorism Forum and especially Morocco’s proactive role in co-leading with the Netherlands the year-long GCTF initiative to address the phenomenon of foreign fighters.
The two parties also discussed a joint proposal that would couple United States’ and Moroccan counterterrorism expertise in such a way that would facilitate Morocco supporting regional security efforts.
Morocco is part of the U.S. anti-terrorism initiative in the Sahel called “Trans Saharian Counterrorism Initiative” that was launched after the attacks of 9/11 to prevent terrorists from finding safe havens in Africa. Maneuvers are held regularly part of the initiative meant to fight Islamist armed groups operating in the region.
Regarding efforts aimed at consolidating human rights and the promotion of economic progress and human development, the United States welcomed, according to the joint statement, the leadership of the King of Morocco.
John Kerry “reiterated the appreciation of the United States to the place of action and leadership of His Majesty the King in deepening democracy and promoting economic progress and human development in the last decade,” the document says, adding that the Secretary of State welcomed the Government’s endorsement of a law eliminating military tribunals for civilians, conforming thus to international norms and best practices with regards to human rights. Likewise, he commended Morocco’s continuing efforts to introduce sweeping changes to its asylum and immigration system, with positive implications for legal and illegal migrants, refugees, and asylum seekers.
The Strategic Dialogue between the United States and Morocco was launched in September 2012 as a mechanism to strengthen bilateral cooperation and advance policies and programs throughout the region and elsewhere where both nations share common values, goals, and interests.