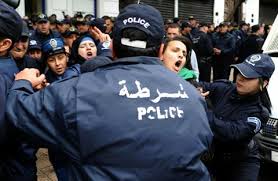 More than a dozen anti-Bouteflika protesters have been arrested by the police ahead of a campaign rally in Tizi-Ouzou, in the Berber region of Kabylie east of the capital of the National Liberation Front (FLN). Dozens of students were angry with the 77 year old incumbent president’s desire to bid for a fourth term in office. They yelled anti-government slogans. One on the main opposition leaders urged for the respect of the freedom of expression.
Although Bouteflika’s chances of getting another term in the April 17 polls are high, his health has been worrisome as he continues to avoid appearing in public. Other allies of the president have been helping him in his campaign because he is too weak to campaign after recovering from a mini stroke last year. Abdelmalek sellal resigned as Prime Minister to become the campaign manager of the president. The government’s campaign has so far been marred with violence and anti-government protesters. At Tizi-Ouzou, crowds chanted “Free and Democratic Algeria” and “Boutef, pull out!”. In 2001, clash between the Berbers and security forces led to the  death of 126 people in Kabylie who were protesting about indiscrimination, poor living and working conditions and government corruptions
As Benflis , an important presidential candidate, was quoted saying  in a rally held in his hometown of Batna that he regrets “that this campaign is taking place in a climate of tension and I have to be honest and say nothing has been done to ensure it is taking place in a calm and serene” atmosphere. He called for the respect of freedom of expression in all circumstances, a value which is the cornerstone of his policy.