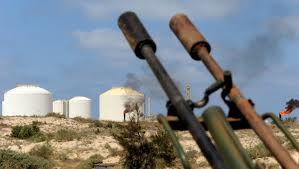 New hopes of reaching an agreement with the rebels overseeing the eastern part of Libya have emerged after Ibrahim Jathran, a rebel group leader, revealed that major progress has been made in negotiations with the authorities in Tripoli. The agreement could be finalized within the next following days if “all national thinking” and “all honorable” Libyans act accordingly. The government has not released a statement regarding the issue.
Prime Minister Abb-Rabbo al-Barassi of the self-declared semi-autonomous region of Cyrenacia in the East emphasized that they have “agreed on all issues with the government.” The eastern region decided on its own to establish a regional government after claims that it has been neglected by the authorities who continue to embezzle oil funds. Rebels in the east of the country have been striving to reinstate the 1951 constitution, and revert to a federalist system sharing power between regions.
There was no mention of the ship which tried to flee with oil. The ship is under custody of Libyan authorities after the US Navy took over the ship and handed it over to them. Last month, the rebels warned that stopping the ship and arresting the crew is equivalent to a “declaration of war.”
The head of the rebel group claimed that the reached agreement “will upset all those who don’t want the good for Libya and its people but it will make happy all national thinking Libyans.” He said that is “what we strive for” because that it is “important” to them.
A delegation from the capital is expected to visit the region before the end of the week to “hammer out the details.” Libya’s government has been gripped with protests since July with oil production falling from 1.4 million to 150,000 barrels daily.