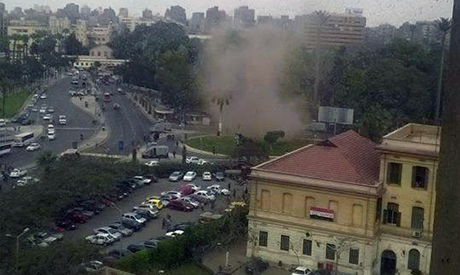 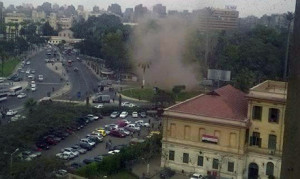 Two bombs exploded Wednesday outside Cairo University, killing at least two people including a top security officer and wounding five other security forces, the Egyptian interior ministry said.
There was no immediate claim of responsibility for the attack but the Islamist militants are suspected to be behind the two bombs that were planted among trees outside the famous university campus.
Supporters of the Muslim Brothers are engaged in bloody showdown of force with the Egyptians interim government since the army deposed the Islamist president Mohamed Morsi last July after mass protests against his rule.
An Egyptian court has lately sentenced 528 supporters of Morsi to death for murdering a policeman and attacks on people and property. These mass death sentences show the hard-line adopted by the Egyptian authorities which seemed determined to step up its fights against the Islamist militants. Hundreds have been killed and thousands arrested in violent clashes between Morsi-supporters and government forces.
Abdel Fattah al-Sisi, the top general who ousted Morsi, is running for the presidential seat and is expected to win the vote because he is seen as Egypt’s de facto leader. He enjoys strong backing from the majority of voters who see him as Egypt’s saviour.
But the Islamist opposition regard him as the mastermind of a military coup that triggered the worst internal strife in Egypt’s modern history.
The Muslim Brotherhood has been branded by the Egyptian government as a terrorist organisation. This movement is currently under investigation in Great Britain which is looking into the Brothers links to extremism in a bid to determine whether they constitute a threat to UK security.
Saudi Arabia has already put the Muslim Brotherhood in its terror watch list. Other oil Gulf countries notably the United Arab Emirates also regard the Egyptian Brothers as a terror organisation, threatening their national security.