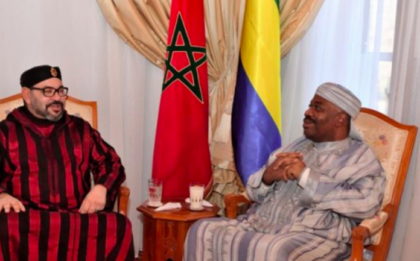 President Ali Bongo Ondimba of Gabon is paying a working and Friendship visit to Morocco.

The Gabonese head of state arrived in Morocco Friday, coming from Scotland where he took part in the 5th International Forum on Investments and in the Conference of the Parties on Climate Change (COP26).

The visit provides an opportunity to discuss, in light of the perfect convergence of views the two countries share, bilateral relations and topical regional and international issues, in particular concerning the issues of peace and security, sustainable development and climate among others.

The President’s visit coincides with the presence in Rabat of the Gabonese Minister of Foreign Affairs, Pacôme Moubelet Boubeya, who held Friday talks with his Moroccan peer Nasser Bourita.

During a press briefing at the end of these talks, Pacôme Moubelet Boubeya stressed the need to strengthen further economic and commercial relations between the two countries, inviting Moroccan businessmen to settle in Gabon and to share their experiences and expertise with their Gabonese peers.

He also announced that the Moroccan-Gabonese joint commission will convene a session very shortly.

The Gabonese official also said that his country plans to organize several events in the city of Laayoune to strengthen its presence in this part of the Moroccan territory, reiterating his country’s continued support for Morocco’s territorial integrity.

The Gabonese embassy in Rabat chose the city of Laayoune last September to celebrate the 61st anniversary of the independence of Gabon which opened a consulate general in the capital of the Moroccan Sahara in January 2020.

A rich program has been set out for this celebration organized under the sign “Gabon in Laayoune”, including artistic performances reflecting the rich Gabonese cultural heritage, an exhibition of Gabonese products, donations of school kits and visits to several projects in Laayoune.