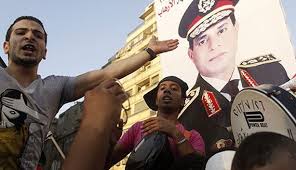 Egypt is divided over the candidacy of the retired Marshall Abdel-Fattah El-Sisi after he announced his intentions of becoming the country’s next president. There have been speculations over his candidacy since ousting Mohammed Morsi. Although El-Sisi is expected to win the elections, he could be facing strong opposition during the elections.
Liberal parties are not against El-Sisi’s candidacy but they want a free and fair election. The Constitutional Party has warned public institutions to stay away from the elections. The party did not discredit El-Sisi but stressed that it will “choose a candidate who participated in the revolution, believes in the democratic path and is closest to the principals of social justice and human rights.” The party is presently headed by Hala Shukrallah; the first woman and Coptic Christian to head a political party in Egypt.
The National Alliance to Support Legitimacy, a pro-Brotherhood coalition, described the candidacy announcement as “the mask has fallen… for the presidency of bloodshed” while supporters of the Muslim Brotherhood has vowed to continue its protests. The Strong Egypt Party, a moderate Islamic party led by former Brotherhood member and 2012 presidential candidate Abdel-Moneim Abul-Fotouh, said the announcement shows “a grave danger to the future of Egypt and democracy.” He launched an attack saying that “Egypt does not need a savior, but it needs justice, freedom, dignity, pride and true independence.”
The Nour Party’s spokesman Nader Bakker said El-Sisi’s speech portrayed “a clear intention to turn a new page” and believes that it “will neutralize many parties” in the opposition. The Egyptian Social Democratic Party wants to see his electoral program before making a decision on him. Egypt’s oldest liberal party, the Wafd Party, has already joined El-Sisi’s wagon.
Hamdeen Sabbahi, a presidential candidate, welcomed El-Sisi’s candidacy.