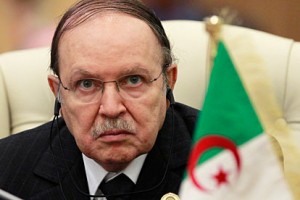 After Abdelmalek Sellal’s resignation as the Prime Minister at the beginning of the month to head the campaign of President Bouteflika, hints have begun to emerge over the possible reforms to be undertaken if the latter stays in power. Constitutional and administrative reforms are high on the agenda while efforts to attract investment will be doubled, Sellal disclosed to a business association during a conference.
The National Liberation Front (FLN) is expected to win the presidential elections with Bouteflika as its candidate despite health concerns. Sellal said Bouteflika’s election for a fourth term will be marked by the revision of the constitution to “consolidate the system and allow more democracy and more respect for all institutions.”
Opposition parties are not likely to affect Bouteflika’s re-election. Some of the parties have decided to boycott the elections in protest to his candidacy. Most of the parties contesting are deemed weak to carry out an effective campaign against the FLN which enjoys the support of army factions and unions.
Although Sellal didn’t dwell on the aspects of the revision nor the reforms, he said that the objective will be to promote investment and boost the economy by fighting against “the dictatorship of bureaucracy since independence.” He assured that the government “will continue to support investments without harming the social gains of Algerians” with its five year economic program.
Analysts believe that the creation of the post of Vice President will be part of the constitutional reforms because 77-year old Bouteflika’s health has kept him away from public appearances.
A stable election or transition of power in Algeria comes at a sensitive time with neighbors Libya, Tunisia and Egypt still overcoming the instability that followed their 2011 Arab Spring revolts to oust long-term leaders.

North Africa Post's news desk is composed of journalists and editors, who are constantly working to provide new and accurate stories to NAP readers.
NEWER POSTEgypt : Economy and Security Are Still at Crossroads
OLDER POSTScores of Migrants Storm Spain’s Enclave of Melilla