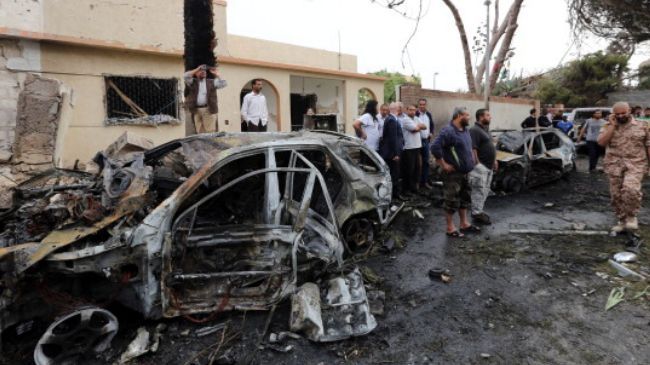 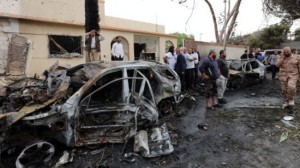 A car bomb attack at the Libyan army academy killed at least eight people and wounded more than twelve in the Libyan city of Benghazi in the east of the country on Monday (March 17). Insecurity and instability in Benghazi is a side-effect of the efforts of the weak ruling government to handle armed groups, groups of former rebels, and militias. These activist groupings had previously fought ex-President Muammar Gaddafi and now they are unwilling to disarm.
The first bomb exploded in the front of the academy building just before the front gate while soldiers were leaving a graduation ceremony, officials informed. As a result, a number of cars that had been parked at the front gate of the academy exploded. One or two other bombs detonated at about the same time injuring about 18 people. Hours later there was also a separate explosion in Benghazi, where armed forces have been fighting militants from Islamist groupings listed as terrorist organizations by the international community led by  the United States. The government named the bombing a terrorist act and declared three days of national mourning.
Many countries have shut their embassies and consulates in the city and a number of foreign airlines have decided to end flies to Benghazi since the US ambassador along with his three colleagues were killed in a militant attack of Islamic fundamentalists in September 2012. Armed men also killed a French national earlier in March and police found seven Egyptian Christians killed in an execution-like style on a beach outside the city. The area is home to a number of oil companies. So far no organization or individual have claimed responsibility for any of the latest series of assassinations. The international community is worried that the incumbent leadership of the country is unable to control violence and restore stability and security in the city and its vicinity. If their assessment is accurate, violence and killings might soon spread to the country’s capital, Tripoli.