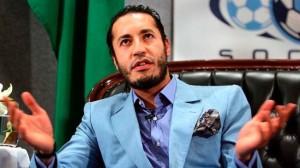 Saadi Gadhafi, the son of the Libyan dictator Muammar Gadhafi, has been transferred by Niger government to Libya where he will stand trial for charges of embezzlement and armed intimidation when he was head of the Libyan Football Federation.
Libyan authorities have been seeking for a long time the custody of the 40-year old fugitive who had fled to the southern African country after the fall of his father’s regime in 2011.
The Libyan government has confirmed the return of Saadi Gadhafi and thanked Niger for its cooperation, affirming that it will abide by the international justice standards during the trial of Gadhafi’s son.
Saadi Gadhafi is accused of shooting protesters and other crimes committed during his father’s autocratic and despotic rule. Some internet websites have posted photos showing Saadi wearing a blue prison uniform with his head and beard shaved.
He is one of Gadhafi’s seven sons. Unlike his high profile brother Saif al-Islam, Saadi Gadhafi is much more known as a businessman and professional footballer with a playboy lifestyle.
Gadhafi’s wife Safia, his daughter Aisha and sons Muhammad and Hannibal have been granted political asylum in Oman, while three other sons of Gadhafi (Mutassim,Saif al-Arab and Khamis) were killed during the fightings with rebels and Nato bombings.
Last February, Niger had extradited Abdallah Mansour, a former top intelligence official, to Libya. For its part, Mauritania had turned the former Libyan intelligence chief Abdullah al-Senussi over to the new Libyan authorities.