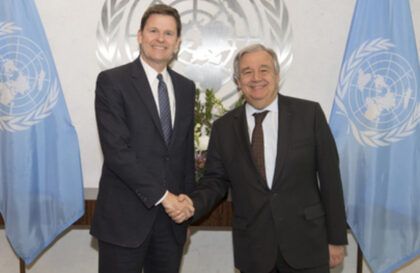 UN Secretary General António Guterres meets this Thursday Head of the UN Mission for the Sahara (MINURSO) Colin Stewart, whose mandate ends on October 31, 2021, according to UN sources.

This meeting comes as the Sahara talks are at a standstill since the two round-table meetings held in Geneva more than two years ago, while no new UN envoy for the Sahara has been appointed by the UN Secretary General since the resignation of German Horst Köhler in May 2019 for “health reasons”.

It is worth noting that several candidates have been proposed by the UN Chief in replacement of Köhler but all his picks have been rejected by the Polisario and Algeria, while Morocco has always supported Guterres’ proposals to fill the position.

During his meeting with the UN Secretary General, Canadian Colin Stewart will reportedly brief Guterres on the MINURSO activities carried out during his tenure as Head of the UN mission.

After leaving MINURSO, Mr. Stewart is expected to take over the UN Peacekeeping Force in Cyprus (UNFICYP) in September.

According to Africa Intelligence news website, two names have been proposed to the UNSG in replacement of Mr. Stewart: Russian Alexander Ivanko, current MINURSO Chief of staff and Canadian Elisabeth Spehar, who is heading UNFICYP since March 2016.