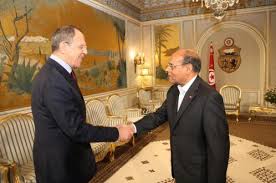 Tunisia and Russia are fostering their bilateral relationships with the visit of Foreign Minister Sergei Lavrov to the country. Discussions behind closed doors will be dominated by trade and commercial topics after trade between the two countries dropped during last year.
Despite the immense attention that the presence of Russian troops in Ukraine has attracted, Minster Lavrov sidelined it and focused on his visit to Tunisia during his visit. He stated upon his arrival on Monday that “we reaffirm our solidarity with the Tunisian people, our support for fundamental changes in Tunisia.” According to him, Russia is “ready to support this process.”
Shifting his attention to one of the objectives of his visit, Lavrov underlined that “the volume of trade in 2013 fell slightly and reached the level of $680 million, we hope to improve this indicator significantly this year.” To discuss means of improving it, Lavrov met with Prime Minister Mehdi Jomaa and will also be having a rendezvous with the Tunisian foreign Minister Mongi Hamdi.
The tourism sector is also part of the agenda. The sector plays an important role in Tunisia’s economy. Efforts are being made to bring back its glory days after being setback by the revolution which marred the country. Nearly 300,000 Russian tourists visited Tunisia in 2013, up 20% from 2012, according to the Russian foreign ministry.
Regional security especially the ongoing violence in Libya and Egypt coupled with terrorism will be discussed by officials.
Meanwhile, the European Investment Bank has awarded Tunisia with a loan a little above the trade volume it reached with Russia. $690million will be giving to the country to support the democratic transition according to the Vice President of the Bank Philippe de Fontaine.