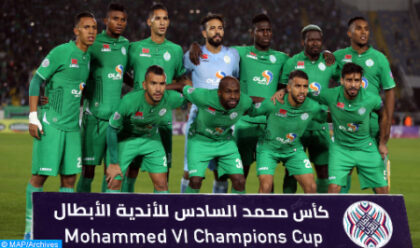 The Moroccan team of Raja Casablanca won the Mohammed VI Champions Cup after victory over the Saudi team Al-Ittihad during the final match of the Arab Cup of Champions, which took place in the Prince Moulay Abdallah sports complex in the Moroccan capital, Rabat, Saturday evening.

The first half of the match, held without the presence of the public, and led by the Egyptian referee Mahmoud Al-Banna, ended in favor of the Moroccan team with three goals to two.

At the start of the second half, the Raja player Sofiane Rahimi scored the fourth goal for his team, then the Al-Ittihad player Romaio da Silva scored a third goal in the 53rd minute. Then the referee decided a penalty in favor of Al-Ittihad team, successfully scored by Romaio da Silva in the 64th minute. After the draw, penalty strikes enabled Raja’s team to achieve victory and thus to win the Mohammed VI Champions Cup.

Following the victory, King Mohammed VI sent a message of congratulations to the members of Raja Casablanca, wherein he expressed his great pride for the performance achieved by the club, which won this precious Cup through high sportsmanship, competitiveness and deep-rooted patriotism, especially since this Cup “bears our name, and this victory coincides with the celebration by the Moroccan people of our birthday”.

“You have given us a trophy that brings pride, joy and happiness”, underlines the Sovereign.

While congratulating the members of the Club and its public for this victory, which once again confirms the strong presence of the Moroccan teams at the various regional, continental and international sporting events, the King commends the efforts made by all the components of the team, technical, medical and administrative executives and players, who have shown great potential throughout this outstanding Arab tournament.

The Sovereign is convinced that this new victory will be a strong impetus for Raja to increase efforts in order to achieve more exploits and win more titles, and to remain a model to follow for all the national sports clubs.