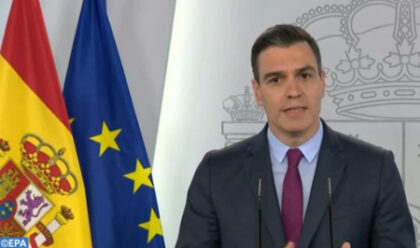 Spanish Prime Minister Pedro Sanchez has welcomed King Mohammed VI’s Friday speech as “a great opportunity” to redefine the pillars and the parameters governing relations between Spain and Morocco, underlining that Madrid has always considered Morocco as a strategic partner of Spain, and also of the whole of the European union.

“Morocco and Spain are allies, neighbors and friends,” Sanchez pointed out during a press conference Saturday at the Torrejon de Ardoz airbase, where he was joined by European Commission President Ursula von der Leyen, and the President of the European Council, Charles Michel.

“I believe that with every crisis comes an opportunity. And I believe that the speech of HM the King constitutes a great opportunity to redefine the relations between the two countries and the pillars on which they are based”, underlined Sanchez during the press conference.

Relations between Morocco and Spain have been in turmoil for some months, but in the speech he delivered on Friday evening on the occasion of the 68th anniversary of the Revolution of the King and the People, King Mohammed VI heralded the end of the crisis, saying that Morocco looks forward to continuing to work with the Spanish government and with the Spanish Prime Minister to usher in a new, unprecedented phase in the relations between the two countries.

The Spanish PM welcomed the content of the Royal Speech and thanked the King for his vision for a bilateral partnership based on mutual trust and understanding.

“Indeed, it is on trust, respect and present and future collaboration that we can build stronger relationships than the ones we currently have,” said Sanchez, while stressing the uniqueness and the depth of the ties binding Morocco and Spain.

“We have always seen Morocco as a strategic partner of Spain, but also of the whole of the EU,” he said, pointing out that “Morocco and Spain are allies, neighbors and friends.”

In his speech, King Mohammed VI underscored that a dialogue took place with Spain after the recent diplomatic crisis which “shook mutual trust and raised many questions as to their future.”

“In addition to the traditional immutable values on which these relations are based, we are keen, today, to strengthen them, bearing in mind the need for a common understanding of the two nations’ interests,” he said.

“I have personally and directly followed the progress of the dialogue and discussions between the two countries. Our goal was not merely to overcome this crisis, but to turn the situation into an opportunity to reconsider the foundations and determinants of these relations.”

The two countries are about to “usher in a new, unprecedented phase in the relations between the two countries, on the basis of trust, transparency, mutual respect and the fulfillment of obligations,” the King said.