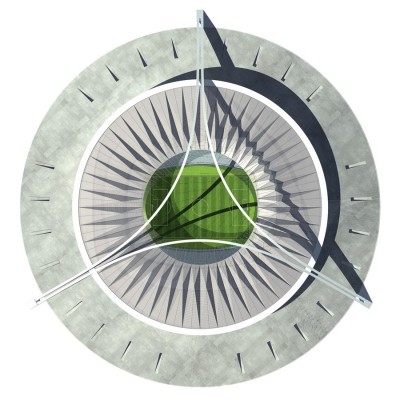 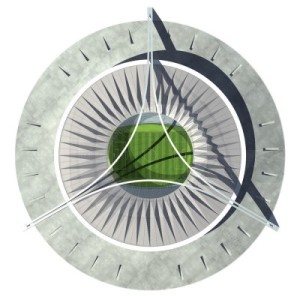 A groundbreaking ceremony was held in Tripoli for a new national football stadium at the western edge of Libya’s capital city as part of preparations geared towards hosting the 2017 Africa Cup of Nations. The ceremony was attended by Prime Minister Ali Zeidan who laid the foundation stone and 68-year-old German football legend Franz Beckenbauer who won the world cup as a player and a coach. During the ceremony Beckenbauer was nominated to become an ambassador for Libya with regards to the premier tournament, a role which he was prepared to take in love of football and in support of the country.
The National Stadium was designed by German architects von Gerkan, Marg and Partners (GMP), designers of three stadiums for the South Africa World Cup. Three sports centers would be built around the stadium’s periphery in a triangular configuration in respect to the historic symbolism of the number 3 which is displayed by three arches. Austrian firm PORR is charged with the responsibility of building the stadium; other venues are to be built in Tripoli, Benghazi and Misrata.
Despite ongoing troubles, the General Secretary of the Confederation of African Football, Hicham El Amrani, dismissed suggestions of switching the event to Algeria as it was the case in 2013 which was switched to South Africa for safety purposes.
Libya won their first African title in February when they defeated Ghana in the Championship of African Nations this year. According to Beckenbauer the Cup of Nations “is the best promotion you ever can make for your country,” as the whole world watches the country. Quoting from Nelson Mandela he said “sport has the power to change the world – football is a power to make a better world.”