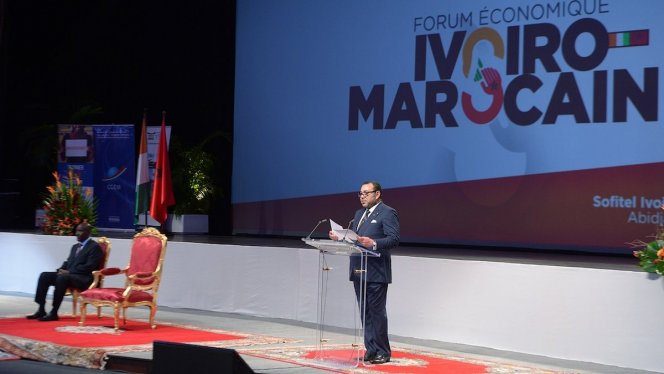 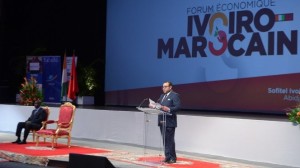 King Mohammed VI of Morocco who is on a four-nation tour in Africa, the second in less than a year, launched on Monday a heartfelt call for boosting inter-African cooperation, rebuilding Africans’ trust in their own potentials, overcoming Afro-pessimism and unleashing the continent’s  intellectual and material potential.
“Africa should learn to trust Africa… and African countries should develop mutually profitable partnerships,” said the King while addressing the Moroccan-Ivorian economic forum held in Abidjan.
… Our continent does not need assistance so much as mutually profitable partnerships. Africa needs human and social development projects much more than it needs humanitarian aid,” he said, insisting that “Africa should no longer remain shackled by its past and its current political, economic and social problems.”
The king who described Africa as “a great continent” urged it to make of  the 21st century that of “African peoples’ triumph over underdevelopment, poverty and exclusion,” to overcome its Afro-pessimism” and to unleash its intellectual and material potential as well as that of all African peoples.”
The continent needs to take its destiny in its own hands, look to the future with optimism and resolve and make the most of its strengths and potential, insisted the King who started his African tour by a visit last week to Mali and who will head after Cote d’Ivoire to Guinea and Gabon.
The King who expressed strong belief that Africa can be “vibrant and developed” provided African countries take action, insisted that
“Africa must rise to the many challenges threatening its political stability and hindering its socioeconomic development.”
“Those challenges, however, can only be met through cooperation, solidarity between African peoples, and respect for the States’ sovereignty and territorial integrity,” he went on to say.
Stressing the need for Africa to forge further fruitful partnerships with the many developed countries that show a constant interest in and sincere commitment to economic progress and human development in Africa, King Mohammed VI urged African countries to “benefit also from the opportunities offered by triangular cooperation as an innovative tool that facilitates joint efforts and helps achieve optimum use of resources.”
“A pioneer in this cooperation mechanism, Morocco is willing to put its credibility and the trust it enjoys with its partners at the service of sister African nations. It is our collective duty to make sure globalization becomes a positive force conducive to development in Africa. In this respect, economic development, trade and regional integration are key issues,” he said.
Morocco is actually known for its earnest efforts to enhance its relations with African countries at bilateral and multilateral levels and to promote progress, peace and stability in the continent.
As put by J. Peter Pham, Director, Atlantic Council’s Africa Center in a recent column, “Morocco’s burgeoning engagement with Africa under Mohammed VI, delivers an unambiguous message: Morocco is an African country of serious political and economic clout, integral to the continent’s development and prepared to play a leading role in its future.”
“For policymakers in Washington, Paris, and other Western capitals long in search of a reliable partner in Africa that can direct its own resources toward enhancing regional security and prosperity, it is a signal they have been looking for,” stated Peter Pham.
The King’s leadership and his country’s actions in matters of peacekeeping, conflict prevention, and economic and human development in Africa are recognized internationally.
In this vein, King Mohammed VI’s efforts to promote peace in the continent and more especially to help the Malian conflicting sides reach a solution to the crisis were welcomed by many Western countries, including France and the United States.
France hailed over the weekend the role of King Mohammed VI to facilitate reconstruction and national reconciliation in Mali as a “very positive, constructive and important role.”
Washington also welcomed the efforts made by Morocco to find a solution to the crisis in Mali and its support to the negotiation process between the Government of Mali and the rebel groups in the north.
The implications of these negotiations go beyond the Malian border, said a State Department senior official. The stability of Mali remains important to global peace and security in the Sahel and in the sub-region, he said.
The dangers posed by jihadist groups actually threaten the whole Sahel- Sahara and Maghreb region.
King Mohammed VI visited Mali while Bamako was hosting preparatory meetings for peace negotiations between the government and Tuareg rebel movements, including the National Movement for the Liberation of Azawad (MNLA.)
At the end of last month, at the personal request of the Malian president, King Mohammed VI had received in Marrakesh the MNLA Secretary General, Bilal Ag Achérif, and urged him to resume dialogue with the Malian government. This movement had slammed the door of an “exploratory” meeting that had earlier gathered in Algiers armed groups from northern Mali.
Although Morocco has no common borders with Mali, it is deeply involved in establishing a sustained peace in the West African country as it is involved in its reconstruction efforts.