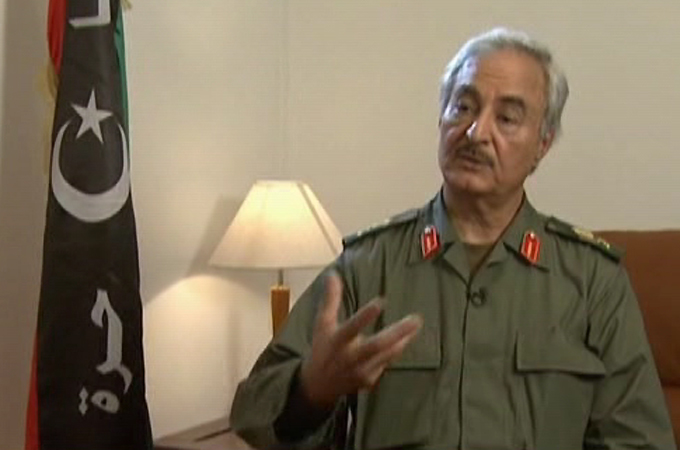 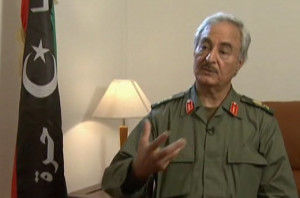 Aiming to bring Libya’s political crisis to a halt, Maj. Gen. Khalifa Haftar, former Libyan army commander called on Libyans to support his military campaign in a recorded video message. In the video, he announced that Libya’s interim government has been dissolved and was to be replaced by the army, what was understood by some to be a military coup attempt. However he denounced any speculation of a coup attempt, saying that the military has done nothing to indicate that its actions represented a military coup. “We have presented the Libyan people with an initiative and they must carry out their duty and speak out, and we are prepared to do what the people instruct us to do,” he said in response to critics claiming that he is trying to instigate a coup.
Following the release of Haftar’s video, which received rejection from Libyan authorities, orders were given for his arrest. Denouncing him, Libyan Prime Minister Ali Zeidan said “we won’t let anyone hijack the Libyan revolution.” Haftar launched an attack against the General National Congress (GNC) and Zeidan’s transitional government saying that “Zeidan has done things which have negatively affected the respectful way people looked at the position of prime minister.”
Meanwhile, elsewhere in Benghazi, six suspected owners of forged Libyan passports were arrested while trying to board a flight to Istanbul after arriving on transit from the Qatari capital Doha. Libyans do not need a visa to enter Turkey. The accused are suspected to be fighters trying to join the anti-government fighting in Syria; a strategy believed to be used by those who want to join the rebel ranks. The government issued a statement stating that investigations were ongoing in coordination with the joint security bureau in Benghazi.