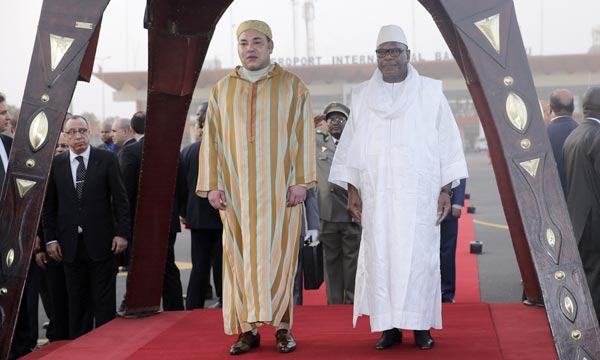 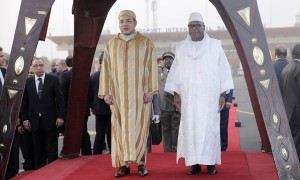 King Mohammed VI of Morocco who started on Tuesday a visit to Mali, first step of a four-stop Africa trip that will also take him to Guinea, Côte d’Ivoire, and Gabon will undoubtedly try to give a new momentum to dialog between the Bamako government and the Tuareg rebels, part of his ceaseless efforts and unwavering commitment to promote peace, progress, and stability in Africa.
The West African nation which experienced a series of setbacks since early 2012, including a military coup d’état, renewed fighting between Government forces and Tuareg rebels, and the seizure of its northern territory by radical Islamists, is emerging from crisis but still faces up a host of political, security, development and humanitarian challenges.
The Bamako Government, part of its efforts to restore stability, engaged in dialog with rebel groups with political demands but this dialog is staggering.
Besides the fact that Mohammed VI enjoys the confidence of both the Malian president and the most important Tuareg movement, the National Movement for the Liberation of Azawad (MNLA), several recent events hint that the king will try to put negotiations back on track.
Earlier this month, the king received in Morocco an MNLA delegation led by the movement leader Bilal Ag Cherif and on the eve of his trip to Bamako, he had talks over the phone with President Blaise Compaoré of Burkina Faso who is also undertaking diplomatic moves to reconcile the various Malian parties.
The two Heads of State discussed the situation in West Africa and the Sahel, with focus on the evolution of the situation in Mali and the Malian national reconciliation process. The two men stressed the need to find a sustainable solution fully respecting the country’s territorial integrity and national unity.
The king’s visit to Mali will highlight by an address before the Malian Parliament wherein he is expected to renew support to inter-Malian dialog.
The Security Council which dispatched a delegation to Mali early February has urged all Malian stakeholders “to engage in inclusive discussions in order to find a sustainable solution to the recurring crisis without preconditions.”
The Security Council delegation reiterated “readiness” to support these parties’ reconciliation efforts.
“We support all the efforts of bilateral and multilateral partners to contribute to this goal,” the delegation said in a statement, warning that “the absence of an inclusive political framework carries the risk of exploitation by “troublemakers.”
The Security Council and the international community fear that if the security situation remains fragile in the country, terrorists and other armed groups may strike again.
There is therefore great hope that Morocco’s King, who is known for his numerous peace initiatives in Africa, will help advance peace, stability and security in the West African country.