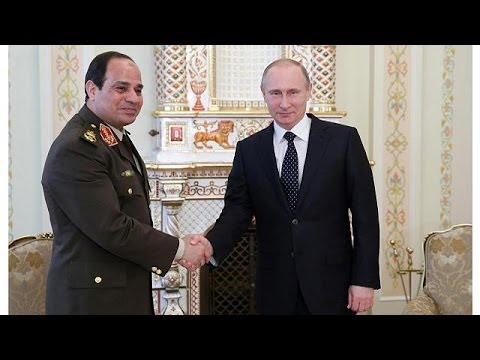 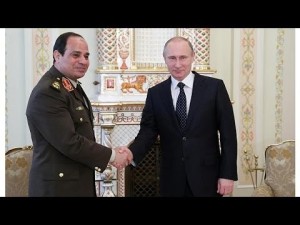 Russian President Vladimir Putin said he supported Egypt’s Field Marshall Abdul Fattah al-Sisi in his bid for presidency. Mr Sisi visited Moscow in order to discuss an arms deal while Mr Putin used the occasion to mention that he was “aware” of Sisi’s presidency bid. Cairo has not delivered an official statement on the issue. Field Marshall and Defence Minister Sisi helped topple ex-President Mohammed Morsi last July and now he is to run for his office in a poll by mid-April, as required by the new constitution. Analysts predict that the chances that Marshall Sisi would win are high thanks to his immense popularity and the lack of any serious rivals.
News agencies report that President Putin said to Mr Sisi “I know that you, mister defence minister, have decided to run for president of Egypt. I wish you luck both from myself personally and from the Russian people.” Mr Sisi came to Russia to negotiate an arms deal worth 2 billion USD after the United States had withdrawn much of its yearly military assistance after Mr Morsi was removed. General Sisi said that his visit to Moscow would hopefully mean a new beginning to the development of both military and technological collaboration between their countries. He added that he hoped his visit would speed up this process.
As to Sisi-Putin talks on Egypt’s prospective military purchases, no further details have been announced, although there have been rumours in Russian media that Egypt is mainly interested in air defence missiles such as MiG-9 jets and helicopters as well as other weapons. Moscow claims that it lost tens of billions of dollars as a result of the loss of defence contracts after Arab Spring uprisings removed Moscow-friendly leaders throughout the Middle East and North Africa region.