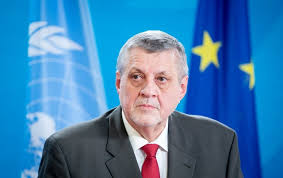 Preparations for the Berlin 2 Conference, scheduled on June 23, were at the focus of phone talks between UNSG’s Special Envoy for Libya and Head of the UN Support Mission in Libya, Ján Kubiš, and Moroccan Foreign Minister Nasser Bourita.

The talks are part of consultations conducted by the UN Special Envoy with national and international stakeholders in the lead-up to Berlin 2 Conference, UNSMIL said in a press release.

During this phone call, the two sides discussed complementary efforts to advance the implementation of the Libyan Political Dialogue Forum Roadmap, notably the holding of the elections and advancing the file of sovereign positions, UNSMIL added.

During his talks with several stakeholders, Ján Kubiš emphasized the importance of holding inclusive Presidential and Parliamentary elections on 24 December 2021 and of starting the withdrawal of mercenaries and foreign forces from Libya.

“Since the beginning of the Libyan crisis, the Kingdom of Morocco has played a constructive role and has contributed to UN efforts aimed at achieving a peaceful resolution of the Libyan conflict,” Spokesman for the UN Secretary-General Stéphane Dujarric had said.

“The Libyan Political Agreement signed in 2015 in Skhirat is a testament to Morocco’s resolute engagement in finding a solution to the Libya crisis alongside the United Nations,” Dujarric added.