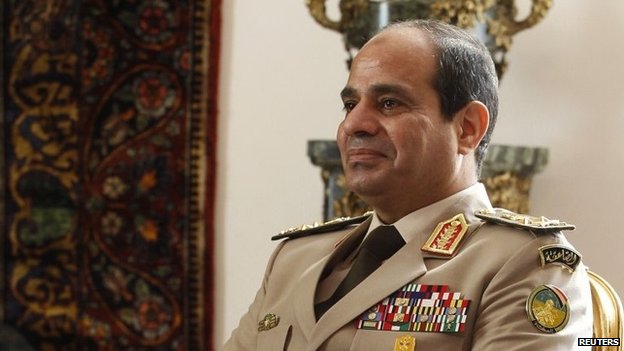 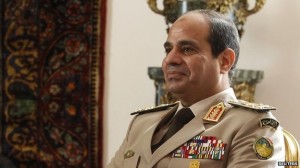 Kuwaiti newspaper has reported citing well-informed sources close to Egypt’s military that the country’s chief of army, General al-Sisi, “has no choice but to meet demands of Egyptian people” and contest for the office of President. Egypt claims that General had been misquoted saying that he would announce such an important decision only to Egyptians themselves. Kuwaiti newspaper Al-Seyassah interviewed General al-Sisi and he reportedly confirmed that he intended to run in the upcoming election. The presidential bid is due to be held by mid-April 2014.
Egypt subsequently denied the claim and announced through army spokesperson, Colonel Ahmed Ali, that newspaper Al-Seyassah simply misinterpreted Field Marshal Sisi.  Mr Ali emphasized that these words were not Sisi’s direct declarations. Sisi’s decision on whether to stand as a candidate for the Egyptian President is but his and he will make up his mind “before the great Egyptian people”. In the meantime, Western media reported – based on the Al-Seyassah story – that Mr al-Sisi had confirmed his candidature for the President.
Army chief al-Sisi toppled the ex-President Mohamed Morsi in July last year and since then there have been a number of campaigns held in support of his candidacy, which culminated in thousands of people gathering and rallying in his name on the anniversary of 2011 Arab Revolution. Mr Sisi is so popular among certain strata of the Egyptian society that – if he runs for the office – it is very likely he will win by a landslide. Despite his immense popularity though, he still has not confirmed his intention to do so and even when he will, he might lose his acceptance very soon unless he finds brisk and quick solutions to Egypt’s many socio-economic problems. Observers warn that Egyptian voters have become rather capricious of late.

North Africa Post's news desk is composed of journalists and editors, who are constantly working to provide new and accurate stories to NAP readers.
NEWER POSTTunisia : a Major Boost to the Country’s Economy
OLDER POSTEgypt:Running or not Running for Presidency, but Rumors Keep on Going