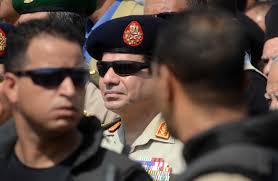 Egypt:Running or not Running for Presidency, but Rumors Keep on Going

Reports by Kuwaiti Daily claiming that Egypt’s Field Marshal Abdel-Fattah El-Sisi is going to run for presidency were denied by the military’s spokesman Colonel Ahmed Mohammed Ali. He referred to the report as the Kuwaiti Daily’s own “interpretation”. The original statement of El-Sisi was posted on his official Facebook page. Expected to run for president, El-Sisi is speculated to announce his intentions in a televised speech later this month.
With presidential elections just around the corner, to be followed by parliamentary elections, the now popular El-Sisi who led the coup that expelled Egypt’s Islamist President Mohammed Morsi and now viewed as Egypt’s savior, is increasingly receiving demands from Egyptians nation-wide to run for president. He is expected to have an easy cruise to victory as a candidate.
However, foreseen and daunting challenges await the country’s next president that is being marred with Islamic militants and their terrorist campaign in the strategic Sinai Peninsula coupled with continual street protests by Morsi supporters and intensifying economic crises.
On the country’s economy, taxes could be raised to counter some current economic problems. 130 billion Egyptian pounds (nearly $1.9 billion) is spent every year on fuel subsidies to keep prices of oil products well below world prices, underlined Ahmed Galal, the interim government’s finance minister. “A comprehensive plan to gradually reduce fuel subsides has been put together” he said, without giving further details. In this light, El-Sisi has shared some of his economic plans through leaked videos, which entails mobile phone users paying for both incoming and outgoing calls and freeing the government of heavy subsidies that provided cheap items and services for the public.
Egyptians reacted violently when Morsi tried to increase taxes as art of conditions to benefit from an IMF loan.