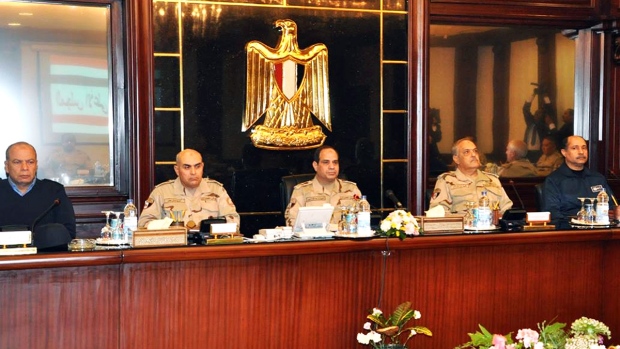 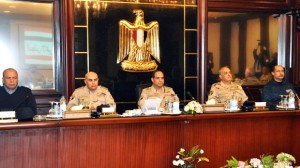 A presidential bid by the Egypts’s army chief Abdel Fattah al-Sisi has been endorsed by the country’s military body earlier this week. The announcement came just hours after Sisi was promoted to field marshal. Sisi who has not yet officially announced his intentions enjoys wide popularity throughout the North African country where he is largely seen as a saviour after removing Islamist president Mohammed Morsi last July after millions took to the streets demanding him to step down.
His promotion is by some analysts seen as a strategy to overcome one important obstacle to be cleared before Sisi can run for the presidency: a member of the military cannot run for the country’s top job. According to retired General Hossam Sweilam who is known for his close ties to the military, Sisi’s promotion was meant as a final honour and “to pave the way for him to leave the military while holding the highest title and contest elections.” If Sisi runs in the elections due in late April, he would likely win by a landslide, given his popularity among large swaths of the public, the lack of possible alternatives, the almost widespread support in Egypt’s media and the powerful atmosphere of intimidation against any criticism of the general in the country.
However, the warning signs of the violent divisions in the country are on the increase. On the one hand, large crowds have recently turned out in rallies calling for Sisi to run for the presidency, which was widely seen as being heavily orchestrated by military circles. Yet, on the other, security forces at about the same time cracked down on Muslim Brotherhood supporters who were protesting to demand the reinstatement of ousted Islamist president Mohammed Morsi, which lead to violent fighting killing about 50 protesters.

North Africa Post's news desk is composed of journalists and editors, who are constantly working to provide new and accurate stories to NAP readers.
NEWER POSTTunisia reinforces cooperation with Iran
OLDER POSTEU Troops Authorized to Use Force in CAR