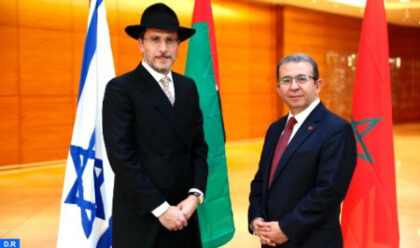 Rabbi Levi Wolff, who heads the congregation of the Central Synagogue of Sydney, has paid tribute to King Mohammed VI for his tireless commitment to the preservation of Moroccan Jewish heritage.

Rabbi Levi Wolff underlined the commitment of the Kings of Morocco to the preservation of the Jewish memory and identity in the Kingdom, making Morocco a unique example of coexistence and tolerance where Jews and Muslims have always lived in harmony.

Speaking during a Shabbat dinner held in honor of Morocco, Rabbi Levi highlighted the specificity of the history of the Jews of Morocco. The Jewish-Moroccan heritage reflects a common and centuries-old history, he said in the presence of more than 300 people, including Australian businessmen of the Jewish faith and representatives of the Moroccan Jewish diaspora.

Rabbi Wolff paid a vibrant tribute to King Mohammed VI for his constant commitment that is reflected in the many initiatives and different actions to safeguard the Moroccan Jewish heritage.

He also expressed hope that other countries will be inspired by the Kingdom’s exemplary vision for the preservation of peace and the promotion of prosperity for the Arab and Jewish peoples.

For his part, Morocco’s Ambassador to Australia Karim Medrek highlighted the spirit of openness, tolerance and peace that has always prevailed in Morocco, stressing that Judaism is an important component of Morocco’s plural identity.

The diplomat also highlighted the commitment of the late King Mohammed V who courageously defended the Moroccan Jews against the abuses they were subjected to under the Vichy regime.

Late King Hassan II continued the commitment in favor of peace in the Middle East and dialogue between monotheistic religions, he added.

The diplomat also surveyed the actions and initiatives of King Mohammed VI who has made the kingdom an exception in terms of coexistence and living together.

Morocco has never erased its Jewish memory, on the contrary, it has enshrined in its Constitution of 2011, the diplomat noted, stating that the Hebrew component is one of the founding elements of the Kingdom’s plural identity.

According to Medrek, the particular osmosis of the Moroccan Jewish culture in the country’s history and identity is illustrated by moments of inter-religious and inter-community complicity, like during the celebration of the Mimouna, a specifically Moroccan Jewish holiday that is now transposed to all countries where the Jewish diaspora lives, or during pilgrimages and religious holidays such as the “Hiloula.”

On the resumption of relations between Morocco and Israel, the diplomat said this should be seen as a natural continuation of a millennial history. This dynamic is the direct result of the King’s high solicitude for Moroccans of Jewish faith all over the world, he said.