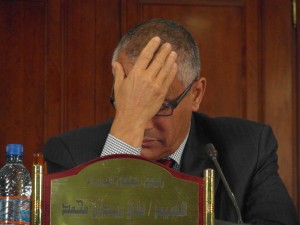 Libyan politicians are at a crucial crossroad as the country prepares for another major political move before the end of the month. The General National Congress, Libya’s parliament, came under gun attack to pressure it in holding a no-confidence vote. Prime Minister Zeidan has admitted that his government has failed and there will be a major cabinet reshuffle. Most of the serving ministers have demanded not to be maintained in the same post if they are to be retained.
The assembly members were in a session when armed militia men, about 30, attacked the building. They wanted to force them to vote the government out but the assembly members were able to abscond from the building. Saad Bin Sharada was quoted saying “we were in the middle of discussions, when armed protesters stormed into the GNC demanding that we hold a vote of no confidence”.
Some opposition political parties have been working towards the vote. Their efforts have been less productive since the GNC is divided on secular and Islamist views over a roadmap to democracy. Some of the opposition parties and critics believe that there isn’t any available replacement for Zeidan.
The Prime Minister admitted that “the performance of the administrative and executive authorities is very slow and confuses the cabinet”. He hinted that if the GNC doesn’t force his government out, there will probably be a cabinet reshuffle in 10 days. “Several ministers have asked not to remain at their posts for personal reasons, in addition to the need to replace some ministers,” he said.
Rebels in Libya have refused to lay down their arms because they claim that the government can’t assure their security. The government blames the “the proliferation of weapons” for the violence.