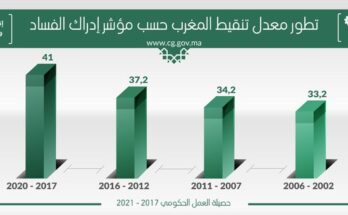 The head of the Moroccan government is seemingly so worried about the outcome of the coming legislative elections, an outcome which does not look very reassuring for his Justice and Development Party (PJD), that he fails to give a thorough image of the contribution of his government to the improvement of the Perception Index of Corruption in Morocco.

Actually, the evolution started as early as 2002 and is the result of the uninterrupted efforts made by previous governments, a fact overlooked by Otmani.

Saad Dine El Otmani, without batting an eyelid, claimed that the Corruption Perception Index has recorded a steady evolution, with a rate reaching 41 between 2017 and 2020, i.e. during the current government mandate, after it stagnated at around 33.2 during the 2002-2006 term.