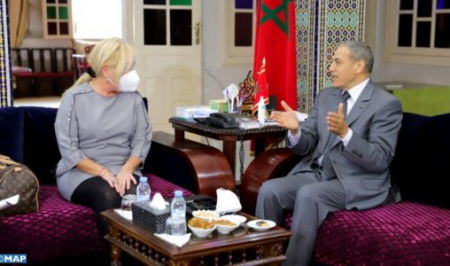 Basque economic delegation “impressed” by quality of infrastructure in Laayoune 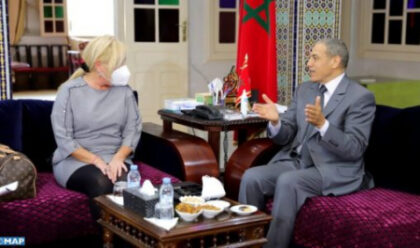 Members of a visiting Basque economic delegation said they were “surprised” and “impressed” by the quality of infrastructure in the city of Laayoune, expressing their keenness to examine investment prospects in the Moroccan Sahara, particularly in the sectors of fisheries and renewable energies.

“We were surprised and impressed by the infrastructures that exist in Laayoune”, particularly in the areas of sport and urban planning, said Maria Tato, who is leading the delegation of Basque businessmen currently on a visit to Morocco.

At a meeting Wednesday with the wali of Laayoune-Sakia El Hamra region, governor of the province of Laayoune, Abdeslam Bekrate, the Basque businesswoman who is at the head of more than 30 companies and hotels, said she is willing to build up partnerships with businessmen from the Moroccan Sahara to launch co-development projects in the sectors of fisheries, renewable energies and recycling industries.

“Before, our economic relations were limited to France and South America,” she noted, stressing that the Basque business community is now open to Morocco.

“The growth of Moroccan economy and the security prevailing in the country encourage us to seriously consider investment possibilities and economic cooperation for a sustainable human development”, said Tato, who is also the director of women’s football at the Spanish Women’s Football Federation (RFEF).

Basque companies have diversified their activities internationally and are now interested in sectors that can be the subject of interesting and fruitful collaborations with Moroccan partners, she noted.

She assured that the Basque delegation will return to Morocco to concretely study the possibilities of launching investment projects with local partners, recalling the “fruitful” exchanges that the delegation had on Tuesday in Casablanca with the General Confederation of Moroccan Enterprises (CGEM).

This meeting focused on means to develop a lasting win-win partnership between Moroccan and Basque private sectors as well as investment opportunities and co-investment, notably in the southern provinces, in sectors such as agribusiness, fisheries, and renewable energy as well as ways to exchange experiences in the fields of research and development, and innovation.

During the meeting in Laayoune, the Basque delegation was briefed on the recent reform of the regional investment centers to speed up the examination and validation procedures of investment files.

The Basque delegation is also expected to visit the other major Saharan city, Dakhla.

North Africa Post's news desk is composed of journalists and editors, who are constantly working to provide new and accurate stories to NAP readers.
NEWER POSTRussia debunks Algerian reports it is building Su-34 fighters for the North African country
OLDER POSTIndex of economic freedom: Algeria ranked 162nd out of 178 countries