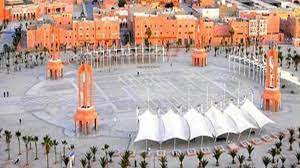 A visiting Spanish delegation discussed, Tuesday in Laayoune, the prospects of cooperation in the field of sports with president of the National League of women’s football and of the women’s municipal club of Laayoune, Khadija Ila.

The Spanish delegation, composed of director of women’s football at the Spanish Federation of women’s football (RFEF) and sports director of the women’s Athletic Bilbao, Joseba Aguirre, visited the premises of the women’s municipal club of Laayoune, which plays in the professional league of the first division, as well as the Sheikh Mohamed Laghdaf stadium and important sports halls of the capital of the Moroccan Sahara.

The two parties discussed the possibilities of concluding a partnership agreement between the municipal women’s club of Laayoune and the RFEF to benefit from the experience of Spanish clubs in this field.

The Spanish delegation expressed its admiration for the quality of the sports infrastructure in the city of Laayoune and for the modern facilities of the municipal club, which had already signed cooperation and partnership agreements with the clubs of Barcelona and Sampdoria (Italy).

The Spanish delegation met in Rabat with president of the Royal Moroccan Football Federation (FRMF), Fouzi Lekjaa and visited the Mohammed VI football Center in Maâmoura.