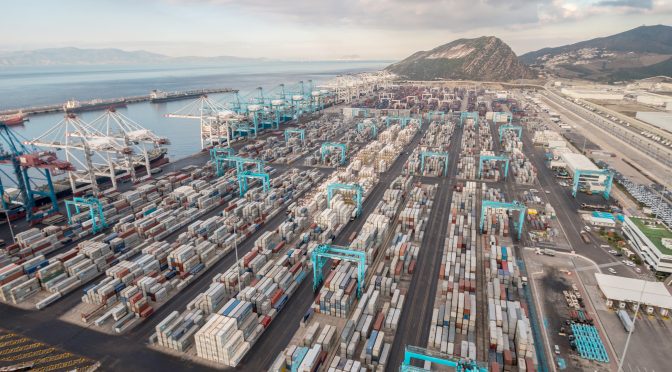 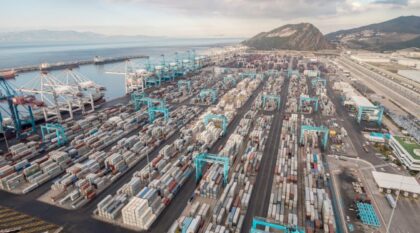 All port activities in Tangier Med have posted sustained growth in 2020, thus allowing the port complex to uphold its position as the leading container port in the Mediterranean basin.

The overall tonnage processed during the past year stood at 81 million tons, an increase of 23% compared to 2019, said the Tangier Med Port Authority (TMPA), noting that the Tangier Med port alone processed 47% of the total port tonnage of the Kingdom of Morocco.

A total of 5,771,221 TEU containers (Twenty foot equivalent) were processed at the Tangier Med port complex in 2020, i.e. a significant increase of 20% compared to 2019, the TMPA said in a press release, noting that this traffic confirms Tangier Med’s position as the leading container port in the Mediterranean basin.

The port, the first in Africa and the Mediterranean in terms of container capacity, has still room for expansion as its capacity was boosted to 9 million containers with the launch of Tanger Med 2 last summer.

With regard to liquid bulk traffic, it has grown by 26% compared to 2019 and recorded a total traffic of 7,968,485 tons of processed hydrocarbons. This growth is mainly due to the bunkering activity for the benefit of ships going through the Strait of Gibraltar, which generated traffic of nearly 1.6 million tons.

As for solid bulk traffic, it recorded a total of 303,705 processed tons, an increase of 18% compared to the previous year, mainly thanks to the traffic of steel coils, wind turbine blades and cereals.

In terms of international road transport (TIR) truck traffic, despite the slowdown in the activity of several industrial units, the Tangier Med port ended the year with traffic similar to that of 2019, i.e. 357,331 TIR trucks processed mainly in the agri-food sector, TMPA said.

In addition, the press release noted that 358,175 new vehicles were handled at the two vehicle terminals of the Tangier Med port in 2020, down 28% compared to last year. This variation is explained by the drop in vehicle sales in Europe and by the slowdown in automobile production by Renault and PSA during the March-May period due to the Covid-19 pandemic.

Passenger traffic was also impacted by the health context since passenger activity has been suspended since March 2020 due to the closure of borders, then picked up slightly in June 2020 in the strict compliance with health measures, explained the press release, indicating that a total of 701,599 passengers passed through the Tangier Med port in 2020, down 75% compared to 2019.

North Africa Post's news desk is composed of journalists and editors, who are constantly working to provide new and accurate stories to NAP readers.
NEWER POSTCountries turning their backs on their history weaken their own destiny, Moroccan King’s advisor
OLDER POSTCOVID-19: Morocco starts shipping vaccines to various regions ahead of immunization campaign