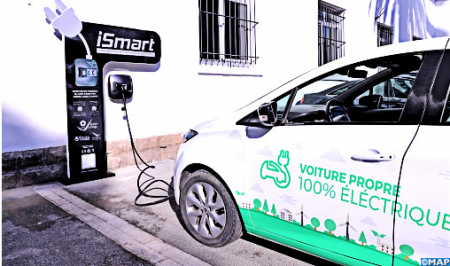 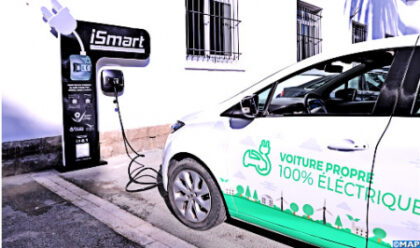 The first 100% Morocco-made smart charging station for electric vehicle dubbed “iSmart” was unveiled, Monday in Rabat, in the presence of the Minister of Industry, Trade and Green and Digital Economy, Moulay Hafid Elalamy.

“iSmart”, a new generation of intelligent electric car charging stations for professional and domestic use , was developed at the request of manufacturers in the automotive sector by the Green Energy Park – a research platform set up jointly by the Institute for Research in Solar Energy and New Energies (IRESEN) – and the Mohammed VI Polytechnic University (UM6P). The project was supported by the Ministry of Industry, and the Ministry of Energy, Mining and the Environment.

Speaking on this occasion, Elalamy said that electric power is taking the lead in the automotive sector and that this smart terminal is a highly technological product that meets the needs of Moroccans who own electric cars.

For years, Morocco has invested greatly in the automotive sector which is being totally transformed towards renewable energy, with electricity as a priority, the Industry Minister said.

For his part, IRESEN Director-General, Badr Ikken told the press that this is the first charging station for electric vehicles that is totally developed, designed and manufactured in Morocco.

The iSmart station will be manufactured as of 2022 with a production of 5.000 terminals a year, he said, adding that this is an excellent example of technology transfer.

The “iSmart” charging station will have many advanced settings including a CO2 capture that provides information about pollution in specific regions. It can also connect to 4G and display information and advertising. The project engineers have also developed a platform that will allow the monitoring and management of the stations in each city, IRESEN chief said.

With powers ranging from 7.5 kW/22 kW/ to 50 kW, the station can charge a compact size vehicle in 30 minutes. “Its design is modular and can be integrated at wall level, fixed on legs, or integrated into the lamp posts,” Ikken said. This initiative accompanies the decarbonization of the mobility sector and the industrial development of a new generation of electric vehicles, he added.

As part of the green ecosystem, in its sustainable mobility component, a production line for this new generation of smart stations will be installed in Benguerir in 2022, with the support of the Ministry of Industry.

This year, Morocco also took the opportunity to consider adopting Moroccan Rachid Yazami’s invention of new battery technology for charging electric cars. The invention is far more efficient than Vivo Energy Maroc’s rapid charging station for electric cars, which charges the car’s battery only 80% in one hour compared to Yazami’s battery that can charge the vehicle in less than 20 minutes.

North Africa Post's news desk is composed of journalists and editors, who are constantly working to provide new and accurate stories to NAP readers.
NEWER POSTAlgeria: COVID-19 suspends Hirak in the streets, social networks take over
OLDER POSTAutonomy under Moroccan sovereignty is the only realistic solution to the Sahara issue, Jared Kushner says