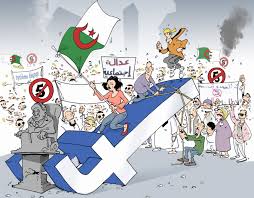 In Algeria, the street protests seem to have faded away for the hundreds of thousands of protesters who, for months, invaded the big cities every week to demand the end of the “system”. The Covid-19 has overcome this popular fervor, but the Hirak, born on 22 February 2019, is resisting.

The Hirak militants suspended their demonstrations because of Covid-19, but the movement did not run out of steam, the spirit of revolt is still there. It is less visible, less present in the streets, nevertheless, Hirak survives and the men and women who created this popular movement, in February 2019, are still demanding change.

The protest today is getting organized, explains Nadia Salem, of the Free Algeria collective: “People are working to organize themselves into professional corporations, students, artists, lawyers, and as far as I am concerned, within the diaspora abroad, since the diaspora is active. Today, me in Paris, I communicate with Algerians from all over the world, in the USA, Canada, Italy, Belgium, everywhere we are today connected, we organize ourselves, and we prepare the future.’’

The Hirak movement has moved from the streets to social networks to put pressure on the authorities, but everything that is written is monitored by the security services. Hirak activists denounce a police state in Algeria, which in their view is reminiscent of that of the former regime of Abdelaziz Bouteflika. However, even if legal action is increasing, “hirakists” have found new ways to resist, says Karim Tabbou, an Algerian opponent and former detainee.

“Algerians have become very creative, sometimes we see people writing about Trump and, in writing, we understand that it’s about Tebboune, it’s not about Trump. For example, about the electoral fraud that took place in Algeria, people have written on Facebook that the person responsible of the rigging of elections in the United States is Mr. Chorfi. Mr. Chorfi is the one who presides over the electoral body in Algeria,” said Karim Tabbou.

Hirak activists continue to challenge the legitimacy of Algerian President Abdelmadjid Tebboune, who suffered a stinging setback last month in the constitutional referendum, which did little to mobilize voters.

The president has been absent for nearly two months, officially to be treated in Germany of Covid-19, and his government is also in a kind of suspended sentence.

Meanwhile, protesters claim to be more determined than ever to change the country, although the regime’s repression does not weaken.

According to the National Committee for the Release of Detainees, arrests and summons to police stations of protest leaders continued during the lockdown.