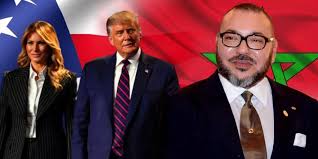 USA recognizes Morocco’s sovereignty over the Sahara, President Trump announces to King Mohammed VI opening of a US consulate in Dakhla

In a historical move, US President Donald Trump has recognized Morocco’s sovereignty over the Sahara and announced to King Mohammed VI the opening of a US consulate in Dakhla.

President Trump informed King Mohammed VI during a phone talk this Thursday of “the promulgation of a presidential decree, with what this act entails as undeniable legal and political force and with immediate effect, relating to the decision of the United States America to recognize, for the first time in its history, the full sovereignty of the Kingdom of Morocco over the entire region of the Moroccan Sahara,” the Royal office said in a statement.

“In this context, and as the first concretization of its sovereign initiative of great importance, the United States of America decided to open a consulate in Dakhla, with an essentially economic vocation, in order to encourage American investments and contribute to economic and social development, in particular for the benefit of the inhabitants of the southern provinces,” the Royal Office statement added.

On this occasion, the Sovereign expressed, in his Name and on behalf of the entire Moroccan people, to the American President his deep gratitude to the United States of America for this historic position.

The King also conveyed his sincere thanks to the American President and his team for this frank and unambiguous support to the Moroccanness of the Sahara; support that strengthens the powerful strategic partnership between the two countries and elevates it to the level of a true alliance that encompasses all fields.

This constructive position of the United States reinforces the dynamics of the consecration of the Moroccan identity of the Moroccan Sahara, confirmed by the positions of support by a group of friendly countries, as well as by the decisions of many countries to open consulates in the Moroccan southern provinces, the statement pointed out.

It also intervenes after the decisive and effective intervention of the Royal Armed Forces, in the area of Guerguarat, in order to maintain security and stability in this part of the Moroccan territory, and to ensure the free movement of people and goods with the African sister countries, it noted.

During the phone talks, King Mohammed VI and the US President also discussed the current situation in the Middle East region.