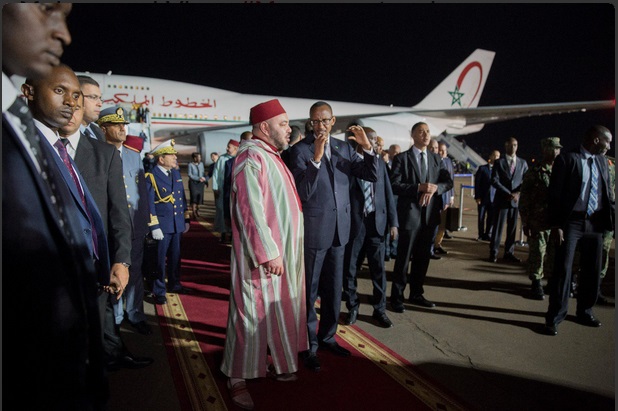 Morocco’s King African Tour, a New Milestone in his Unwavering Commitment towards Africa 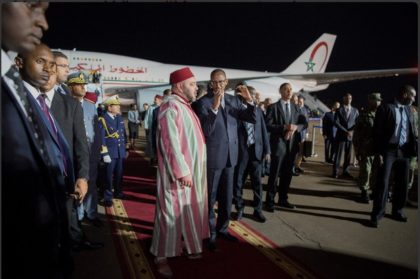 It is official! King Mohammed VI of Morocco flew on Tuesday to Rwanda, first leg of a tour in Eastern Africa that will also take him to Ethiopia and Tanzania.

The King’s first tour to the English speaking states east of the continent is part of an African strategy that has so far yielded fruitful results in terms of political and economic cooperation with French Speaking sub-Saharan states.

The composition of the delegation accompanying the King gives clues as to the topics that will top the agenda of talks between Morocco and the visited countries.

The royal tour actually marks the beginning of a new era in relations between Morocco and the three eastern African countries and highlights their shared commitment to contribute to the emergence of a new united and strong Africa.

Besides, the three eastern African countries are all eager to bolster their cooperation and partnership with Morocco, given the credibility it enjoys worldwide and especially in Africa and given the reputation of Moroccan companies operating already in many African countries, notably in Senegal, Côte d’Ivoire, Gabon and Niger.

The current tour, once again, evidences Africa’s central place in the Kingdom’s foreign policy and the Moroccan King’s forward-looking vision of inter-African cooperation.

In so many of his speeches, King Mohammed VI underlined the importance of Africa for his country, diagnosed the scourges hampering the continent’s take-off and stressed the need to consolidate South-South cooperation as the best means to boost Africa’s development.

“Africa has been given top priority in Morocco’s foreign policy…and Morocco adopts a win-win approach underpinned by solidarity in its relations with Africa,” the King said in a speech delivered in August.

“For Morocco, Africa means more than just being part of a geographical area, or having historical bonds with the continent. Africa also means sincere affection, appreciation, close human and spiritual relations as well as tangible solidarity. Furthermore, Africa is the natural extension of Morocco and the embodiment of the country’s strategic depth,” the King had underlined in his speech.

He had also shed light on the Kingdom’s “multi-dimensional relationship” with Africa, saying that “Morocco contributes, along with other African countries, to the implementation of human development projects and the provision of social services which have a direct bearing on the lives of people in the region.” “For us, Africa is not about goals and objectives; dealing with Africa involves a commitment towards the African citizen, wherever he or she may be,” the monarch said.

Therefore, the King’s current tour in the continent comes as another opportunity to foster co-development and establish win-win partnerships and thus materialize Morocco’s strategy for Africa that has economic, social, cultural and religious dimensions.

Kigali authorities, for example, are aware that they can rely on a trustworthy partner like Morocco to accompany their young nation towards further development and progress.

“We are prompted by a strong determination to upgrade cooperation with Morocco in various fields,” Rwandan Foreign Minister Louise Mushikiwabo was quoted by local New Times daily as saying.

The Rwandan official who described the North African country as “a depositary of centuries-old civilization,” hailed the advanced expertise developed by Morocco in several areas, including finance, real estate, pharmaceuticals and tourism.

Ms. Mushikiwabo called the two countries’ private sectors to play a decisive role in shaping this new Moroccan-Rwandan partnership, noting that discussions to establish a legal framework to this partnership are well advanced.

She said she is confident that companies in both countries are aware of the importance of this new chapter in relations between Rabat and Kigali.

The Rwandan leading newspaper said in this vein that representatives of some Moroccan companies have already made exploratory visits to Rwanda to prospect for partnership opportunities.

The Royal visit to the three eastern African states will wrap up by the signing of several agreements that will give a concrete and tangible aspect of Morocco’s commitment towards Africa that is permeated by co-development and solidarity. This also adds an edge to the Kingdom’s official request to regain its natural place in Africa’s institutional family and mirrors Morocco’s steadfast engagement in favor of the African citizen.