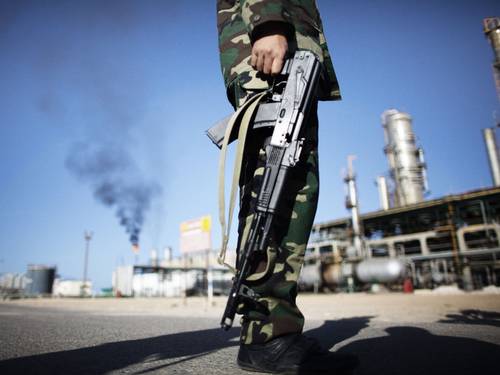 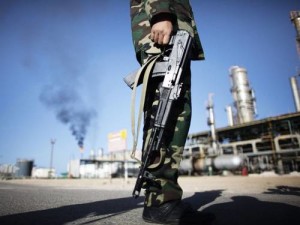 Shortly after Prime Minister Ali Zeidan announced on Wednesday that the Al-Harriga terminal which has a production capacity of 110,000 barrels will resume production and exportation after reaching an agreement with the protesters. Libya’s National Oil Corporation (NOC) published on its website that it has lifted the force majeure on the oil terminal on Thursday. However, protesters are still at the terminal and claim that they have not concluded any agreement with the government.
Production at the Al-Harriga oil terminal has been blocked for several months.  Prime Minister Zeidan said that technical works are delaying the reopening but they are expected to end by durng the weekend.
Libya’s oil crisis has seriously affected the state’s coffers. In a bid to end the rampant armed protesting and siege of oil terminals, the government has promised to increase the salary of the oil workers by 67% in 2014. However, the protesters seem unfazed by the promise and continue to occupy oil terminals in the east and western part of the country.
The Al-Harriga agreement was negotiated with the local authorities and notables of the area. It is expected to be ineffective because some protesters and local tribes are against it. A local in the area said described the situation as “chaotic” and confirmed that “protesters are still inside the port.” He said the scenario on the ground is “different” from the agreement. Saad al-Fakhri, the deputy head of the oil workers union, said exports had yet to resume.
The east and southern part of Libya have always complained of being neglected by the government despite producing much of the country’s wealth.  The government has promised to build oil refineries in both regions as part of efforts to appease the tension in the area.

North Africa Post's news desk is composed of journalists and editors, who are constantly working to provide new and accurate stories to NAP readers.
NEWER POSTPriorities Anyone? – Obama’s Egypt Problem Isn’t Going To Go Away
OLDER POSTAlgeria-Morocco: Nothing Works Anymore