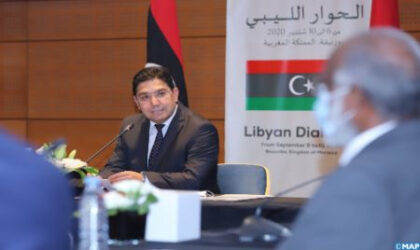 The compromises reached by the two delegations of the Libyan High Council of State and the Tobruk Parliament at their meetings held in Bouznika have confirmed Morocco’s belief that Libyans are capable of finding solutions to their problems without tutelage or influence as they are able to determine the interest of Libya and the way to serve it.

The remarks were made by Foreign Minister Nasser Bourita, Thursday in Bouznika, shortly before the reading out of the final joint statement issued at the end of the two Libyan delegations’ meetings, held within the framework of the Libyan dialogue.

He welcomed the compromises reached as, he said, “they augur well and bring good news” to the Libyans.

Bourita underlined that, as it has been confirmed during the Bouznika meetings, Morocco has always been convinced that the High Council of State and the House of Representatives are the cornerstone for any progress towards finding solutions to the Libyan crisis.

He also stressed that the important compromises reached by the two delegations regarding the filling of positions of sovereignty are not a mere declaration of intention or mere recommendations, but rather compromises and concrete decisions about institutions and issues that have a direct impact on the daily life of the Libyan people.

The Moroccan top diplomat congratulated the two delegations on these compromises, considering that the institutions subject to these decisions symbolize the unity of the State and that the unification of these institutions is an essential element of any future solution to the crisis in Libya.

He also praised the positive atmosphere and the spirit of fraternity and responsibility that prevailed during these meetings, where the interest of Libya and its people took precedence over any other consideration.

Bourita expressed thanks to all the countries and international and regional organizations that voiced their support for the Libyan dialogue in Bouznika and hailed the efforts made by both delegations to reach the compromises.

The Inter-Libyan talks held September 6-10 were meant to preserve the August 20 ceasefire and provide the rival Libyan parties with a platform to discuss means of moving forward towards solutions to the Libyan crisis, free of harmful foreign meddling.