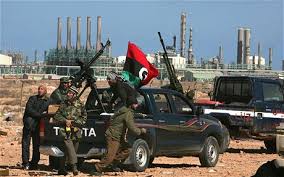 Tunisian capital Tunis will host on March 21 a regional ministerial meeting of Libya’s neighbors to discuss political turmoil which has crippled the North African country since the ouster of Gadhafi and is posing threats to the internal security of its neighbors due to the increasing expansion of terror Islamic State.

The forthcoming meeting will gather Libya’s neighbors namely Algeria, Egypt, Sudan, Chad, Niger and Tunisia (host). Representatives of the Arab League, the African Union and the European Union as well the UNSMIL Chief will attend the high-level meeting.

Libya’s neighbors will have an opportunity “to discuss ways to support the Libyan political process and bolster efforts to restore peace and security,” said the Tunisian foreign Ministry. Tunisia has been most badly affected by the chaos in Libya and was hit by repeated terrorist attacks facilitated by IS fighters trained in Libya.

Tunisian authorities are against a foreign military intervention in Libya fearing that it may worsen the security situation in the region.

In a separate development, the Tunisian ministry of religious affairs launched a national anti-terrorism campaign aiming to stamp out terrorism and fight integrators of hatred. The ministry adopted “Tomorrow will be Better” as a slogan of the year-long campaign [March 20, 2016-March 20, 2017].

The campaign based on “the moderate Islam of Zitouna”, will also target youth who have fallen prey to terrorist recruiting cells.

More than 5,000 young Tunisians according to recent a UN working group report, have left the country to swell terrorist organizations in Iraq, Syria and Libya.