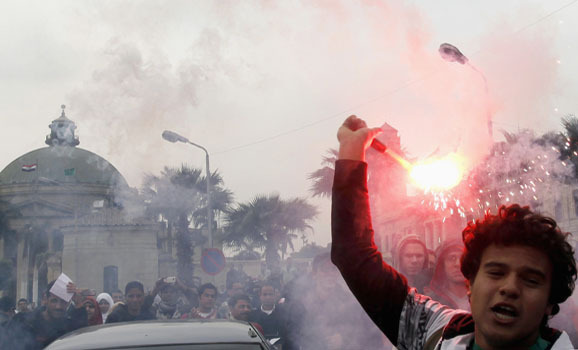 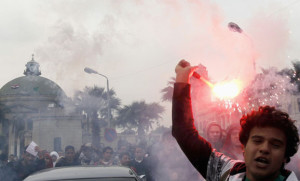 Between 1,500 and 2,000 university students have taken the Cairo University campus as a venue to express their dissatisfaction with the Interim government. The academic year just got started in Egypt and demonstrations were reported to be held in several cities and universities. The students voiced their anger against political and campus freedoms that they endure.
The popular slogan chanted by the students was “Down, down with military rule.” The military took over power on July 3rd after demonstrations against Mohammed Morsi’s government. It claimed that it acted under the “will of the people” before handing over power to an interim government that it supports.
The protests by university students is described as an important development because it is the first time campuses are used to protest against the coup d’état.
The military launched a massive operation to bring an end to demonstrations held by supporters of the Muslim Brotherhood at places very close to mosques. The operation left hundreds dead and thousands arrested.
At the beginning of every academic year, 700,000-750,000 gain access to universities. Youths of Egypt have been the symbol of the revolutionary movements since it started with president Moubarak. Egyptian universities have long been dominated by the presence of the Muslim Brotherhood. Therefore, there are worries that the protests could get out of hand if the military tries to quell it.
Although some of the students were arrested, the campus protests are expected to be held every morning for a few hours. Suez, Alexandria, Fayyom, and at several universities in Cairo, greater Cairo and Giza are reported to be engaged in the protests.
A Cairo court is due to rule on Monday on whether the Brotherhood should be dissolved, a verdict that could trigger more protests and violence.