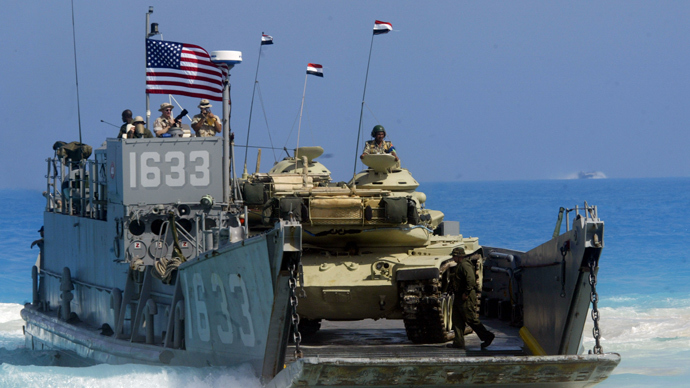 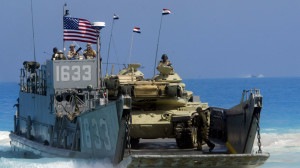 While more and more voices, including those of Congressmen and editorialists, are criticizing the Obama Administration’s stand on the crisis in Egypt and denouncing as incoherent its foreign policy, President Barack Obama announced that the United States is cancelling its biennial joint military exercise with Egypt, initially scheduled for September.
“While we want to sustain our relationship with Egypt, our traditional cooperation cannot continue as usual when civilians are being killed in the streets and rights are being rolled back,” Obama, who cut short his holidays, said on August 15 in Chilmark, Massachusetts.
The president who condemned the violence as well as the interim government’s decision to reinstitute emergency law, said the cycle of violence and escalation on both sides is feeding the country’s cycle of polarization and “needs to stop,” and that along with lifting the state of emergency, a national reconciliation process giving all parties a voice in Egypt’s future should begin.
“Commitments must be kept to pursue transparent reforms to the constitution and democratic elections of a parliament and a president. And pursuing that path will help Egypt meet the democratic aspirations of its people while attracting the investment, tourism and international support that can help it deliver opportunities to its citizens,” he said.
He insisted that Washington appreciates the complexity of the situation but “we don’t take sides with any particular party or political figure.”
Obama’s decision to cancel the drills and his denunciation of the violence did not silence criticism.
“Whether it is Egypt, Syria, Iraq, or the wider region, the failure of the Obama Administration to use our influence to shape events in this critical part of the world has only diminished our credibility, limited our influence, and constrained our policy options. The events now unfolding in Egypt and the Middle East will directly impact the national security interests of the United States, and we cannot remain disengaged.”
This came in a joint statement issued on Friday by Republican congressmen, John McCain and Lindsey Graham. The two deplored the turn of events in the North African country where, they said, “the interim civilian government and security forces – backed up, unfortunately, by the military – are taking Egypt down a dark path, one that the United States cannot and should not travel with them.”
“…We cannot be complicit in the mass slaughter of civilians. It is neither in our long-term national interest nor consistent with our values and laws to continue providing assistance at this time to Egypt’s interim government and military,” the two congressmen said urging the Obama Administration “to suspend U.S. assistance to Egypt and make clear to the current leadership of the country what steps we believe are necessary to halt Egypt’s descent into civil conflict and ultimately to restore our assistance relationship.”
In interviews to the US media on Sunday, John McCain, who was Obama’s challenger in the 2008 presidential elections, renewed his call to cancel the promised $1.3 billion aid to Egypt.
Although McCain had voted last month for maintaining this aid, he argued on Sunday that U.S. military aid, which is seen as a backing to the army, is fueling anti-American sentiment.
The U.S. media have also been very critical of the Obama Administration which did not denounce the dethronement of Mohammed Morsi as a coup but rather, as inadvertently put by Secretary of State John  Kerry, “to restore democracy.”
American politicians and media blame the Obama Administration for its semantic contortions to avoid using the word “coup” since “a coup” implies, as required by U.S. law, the suspension of the some $1.5 billion assistance, the largest part of which going to the army.
Analysts explain Obama’s reluctance to cut off funds by fears to lose a means of pressure on the military and to fail force them hand over power to the civilians. By his cautious attitude, he also tries not to put at stake the 1979 Egyptian-Israeli peace treaty and at the same time ensure that the Suez Canal will not be closed to US tankers and oil suppliers.
However, whatever the U.S. interests, violence verbal denunciation and drills cancellation do not seem enough for Obama’s critics.

North Africa Post's news desk is composed of journalists and editors, who are constantly working to provide new and accurate stories to NAP readers.
NEWER POSTIs Algeria the Odd One Out in the Arab Spring?
OLDER POSTTunisia: Ennahda Makes a U-Turn Ahead of Bankruptcy