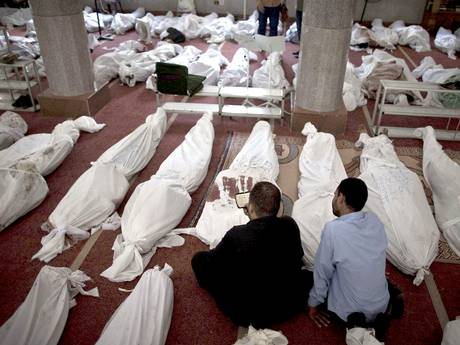 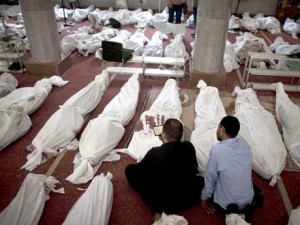 After weeks of procrastination, hesitation and standoff between the Egyptian interim government and supporters of the Islamist president Mohammed Morsi, ousted by Gen. El Sissi, the security forces moved in to break up sit-ins and protest camps set up in Cairo by Muslim Brotherhood supporters demanding Morsi return to power.
But the hardline move by the military caused havoc, deaths and triggered a new wave of violence across the most populous country in the Arab world, raising fears that Egypt might slip into further chaos, divisions, civil war and bloodshed.
The death toll of the military intervention was very high. The official numbers reached 525, although this figure could be higher because the Muslim Brotherhood claims that more than 2,200 protesters had been killed and some 10,000 wounded in their two stronghold camps established in Cairo.
The dramatic events that rocked Egypt were aired by TV stations worldwide showing the disturbing images of the clashes and bloodshed. They described what happened in Cairo as “a carnage”, “massacre” and “Day of shame and bloodshed”. Many capitals around the globe were quick to condemn the use of force to clear protests. They also called on security forces to act with restraint and deplored the loss of life of all sides, including innocent people.
Western countries and the United States called on Egyptian leaders to open national dialogue and seek reconciliation, insisting on the respect of rights of free assembly and urging all parties to resolve the political impasse through peaceful means.
European and Arab negotiators have tried for weeks to no avail to hammer out a last minute deal, bridge the gap between both sides and persuade them to take a host of mutual confidence-building measures. These include the release of prisoners, an honorable exit for Morsi, an amended constitution and fresh elections next year.
According to some analysts, the illusion that the military-backed interim government was willing and able to lead the country to inclusive elections evaporated and waned away amid the carnage on Cairo’s streets. Undoubtedly, the bloodshed has made it more difficult for the Brotherhood to persuade its members to stick to peaceful resistance or accept the roadmap spelled out by the government installed by the army after Morsi’s removal.
Several western experts slammed the heavy-handed approach in dealing with the protesters, saying that the military rule has unveiled its true face. They went on further to suggest that military bloody crackdown on Islamist protesters might be a prelude to widespread campaign against the Egyptian Muslim brothers. The curfew and state of emergency announced by the army may be a good opportunity for the Generals to restore order and carry out their agenda.
But the Egyptian Muslim brotherhood vows revenge and remains defiant, saying the protesters will continue their struggle until the end of the military coup. They say anyone thinking that the top brass will hand over power easily without a fight has got to be extremely optimistic.
This means that the country is heading towards more turbulent waters, dealing a hard blow to the hopes that the Arab Spring might yield more democratic governments. But the hard reality shows disappointment with many Arab countries that changed regimes and rulers still struggling to find the right balance.