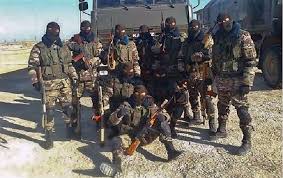 The Russian mercenary firm Wagner Group has left Libya after forces of the UN-backed Government of National Accord (GNA) took over the strategic Al-Watiya airbase, a local mayor said.

Salem Alaywan, mayor of the town of Bani Walid, told a local television channel that three planes took off with Wagner elements.

A UN Libya sanction committee, in a report handed to the UN Security Council last week, indicated that Wagner Group has smuggled in the oil-rich African country at least 1,200 fighters from various nationalities to back Haftar forces.

In another development, the field commander of the GNA militants in Misrata, Ahmed Al-Haddad, last week told the Italian news agency ANSA that the next target for their militants is to liberate the oil crescent area and station there with the help of the Turkish allies.

Al-Haddad said that the GNA’s militants formed an operation room for the “liberation” of the oil crescent in eastern Libya. “Members of the operation room received advanced training with the help of the Turkish allies to manage combat operations and tasks to control and secure oil sites and installations,” he said.

The military leader in the city of Misrata pointed out that the time has come to re-open the pipelines and export Libyan oil, pointing out that countries that have supported the GNA militants will have priority in benefiting from the Libyan economic resources.

Haftar launched in April last year a military offensive to dislodge the GNA from capital Tripoli, which, he claims, is controlled by Islamists and terror groups. His offensive was countered by GNA resistance.