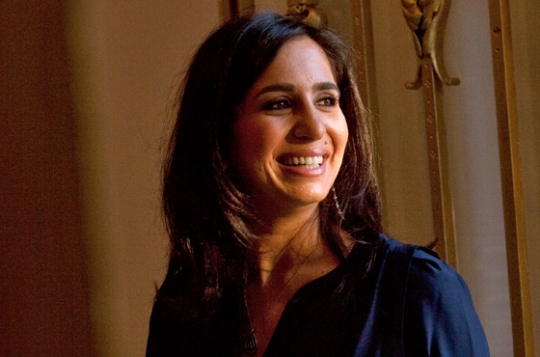 Souad Mekhennet. The name sounds alien for English-speaking readers but not like the many foreign names that pop up if you Google USA-based journalists. It does not sound Irish, Russian, Polish, Korean nor Japanese. The surname is very familiar in the Arab world and the name is easily pronounced in the Middle East. The name is actually that of a journalist of Turkish-Moroccan descent who decided to lift the veil on the Muslim world, on the fears and frustrations of Muslims, on their hopes and expectations, on their everyday reality in an era marked by critical and sometimes traumatic changes…in the U.S. renowned Newsweek magazine.

Although many U.S. news organizations are cutting back on foreign coverage and shrinking their editorial staffs to cope with the economic crisis, the US magazine gave Souad Mekhennet the opportunity to have her own column where she deals with the changes sweeping on the Middle East and on other parts of the world. “With the Middle East, Northern Africa, Afghanistan and Pakistan embroiled in change and rebellion, Souad Mekhennet addresses what this means for the region and the challenges it presents for Muslims in the West,” writes “the Daily Beast” about her column. Souad Mekhennet started being more and more interested in the Muslim World after the September 11 attacks in the United States. Shocked by the killing of some 3,000 innocent people, the reporter wanted to go deeper in the minds of those individuals who blew up themselves without hesitation. Thus, she started covering radical Islamic movements and conflicts and terrorist attacks in Europe, North Africa and the Middle East.After she worked from 2002 to 2004 for the Washington Post, she joined The New York Times where she was a reporter until 2012. Also, from 2010 on, she was member of the “female factor team” at the Global edition of this U.S. publication, writing about Muslim women related issues. As a member of the investigative unit at The New York Times, she covered war zones, terrorist attacks and the “war on terror,” including renditions and human rights abuses.

“Souad Mekhennet was one of two reporters who broke the story of the rendition of Khaled el Masri, a German citizen, who was detained, flown to Afghanistan, interrogated and allegedly tortured by the CIA”

She also worked on a series called “Inside The Jihad,” where she and her colleagues interviewed members of radical jihadist organizations all over the world. According to analysts, the series provides a unique look into Jihadist strategies and motivations. In 2012, as a Nieman Fellow at Harvard University, she conducted a research on the “long-term strategies of terrorist organizations since the Arab Spring.” Ms. Mekhennet is the co-author of two books, “Die Kinder des Dschihad:Die neue Generation des islamistischen Terrors” and “Islam,“that were published in Germany. Born in Germany in 1978 to a Turkish mother and a Moroccan father, Souad Mekhennet has a background that triggers the interest of Western media which explains her numerous appearances on a number of U.S. and European radio and TV talk shows.Besides being a columnist at Newsweek, she is also reporter for the German ZDF TV lifting the veil on the Muslim world and opening a different window onto a little-known world, an often misunderstood world.